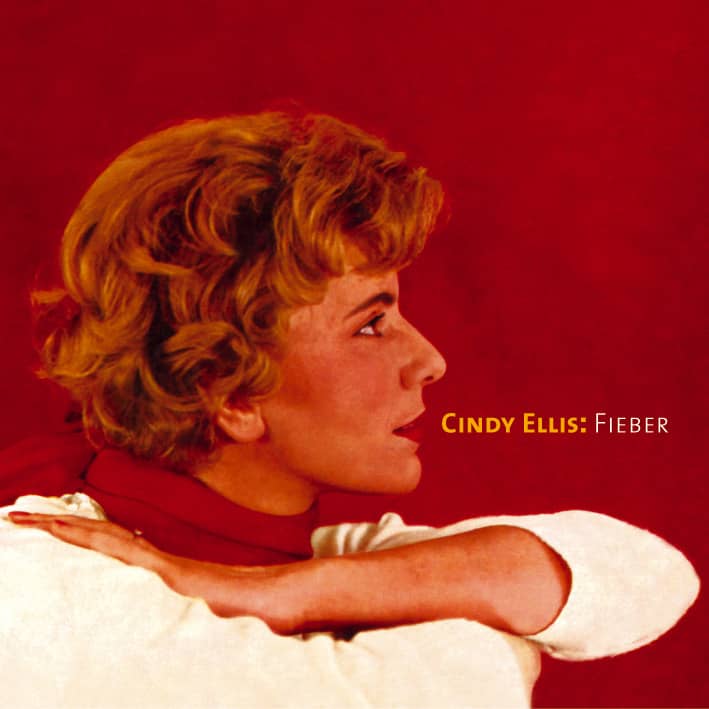 Who wants to find information about the artist Cindy Ellis in conventional sources today, has extremely bad cards. No lexicons, other technical and non-fiction books - at best a few newspaper clippings from the past can still be found. But they just scratch the surface a little.

All the more beautiful when a coincidence leads to the tracks of what you are looking for - and the first contact is already a surprise. Cindy Ellis was born in 1936, but as is so often the case in the entertainment industry, this date was'fiddled around' in the late 1950s. Especially record companies - motto:'Jugendwahn', absolutely no new bad habit - already at that time thought they had to make their artists younger than they really were; in the ultimately only embarrassing but at the same time contemptuous misbelief, achievement and ability had to do even the slightest with age. And so the first thing Cindy Ellis corrects or adds is this date: "I wish it were, but I am a full ten years older! I was born in London on 14 July 1926."

And Cindy Ellis, one might assume, was not and is not her real name - that is Evelyn Fredericks. How the pseudonym came about will be mentioned later. Her father was English, her mother German, who moved to Frankfurt/Main with her daughter Evelyn (then two years old) after the death of her considerably older husband. Only four years later, the musical talent of the child, who learned to play the violin and piano, became apparent. Skills that should be intensified at the Musikhochschule Frankfurt. Actually, she was more interested in singing than in singing, but she was still too young: "Up to the age of 18 I concentrated on the harp".

Even before that, they went on a three-month tour abroad with a group of students. It was only thanks to her good performances that the minor was allowed to travel with her: "It was war, and men were missing everywhere, including a violinist for a Haydn quartet. By special permission they took me with them. "We played in Paris, Biarritz, Besancon, San Sebastian, among others."

Rewarded for good performances with a talented scholarship, she then changed to singing as Evelyn Mayer.

The Second World War was over, human and material hardship everywhere, that was no different in Frankfurt. And so the'singer in training' earned herself a few pennies whenever and wherever possible - just like many other students. She still remembers one of these welcome opportunities: "There was a series of events entitled 'Broadway in Frankfurt - We invite you' in the former Olympic Cinema. It was neither a musical nor a variety show, rather a kind of revue - with artists, singers, dancers from Berlin's Metropol, a very colourful mixture. There was even a big band on stage. It was directed by Heinz Gietz (jazz pianist, pop author, arranger and producer and in 1966 founder of the Cornet record label in Forsbach; the author). I was there for four weeks, there was an afternoon show in German every day and a second show in English in the evening. I sang songs like'Winter Wonderland' and'White Christmas' and earned some marks this way. "That was incredibly valuable in those days."

Two years later it became clear that despite her life-sustaining secondary activities, she did not miss out on her studies: in 1948 the artist had graduated from high school in opera. The extra activities resulted in the first connections to many musicians of the local, gradually flourishing jazz scene, who played the limited-quashed National Socialist'culture' stink of the past to the ground. Here the singer also met her husband, a committed hobby pianist who actually came from the textile and advertising industry. The couple got married in 1950, and so Evelyn Fredericks finally became (the still valid) Evelyn Asal.

Now was the time to set the professional course: "I received an offer of permanent employment from the Hessische Oper Wiesbaden. Their salary expectations were 250 marks per month. That was better than nothing at the time, but that's the sum I got with my singles performances - sometimes per evening. Furthermore, the idea of daily commuting between Frankfurt and Wiesbaden didn't inspire me much." Thus the classical singing career of Evelyn Asal was over once and for all before she even started. Information to the contrary from old press releases is not correct, she has never worked on the opera.

And another source of income

Filter
No results were found for the filter!
Cindy Ellis: Fieber Art-Nr.: BCD16649

1-CD with 28 pages booklet, 20 tracks, playing time 58:08 minutes. CD premiere at Bear Family Records for an artist who was considered to have disappeared. More than 40 years after their first release, 20 tracks by singer Cindy Ellis are...
$17.65
Song preview
Funktionale