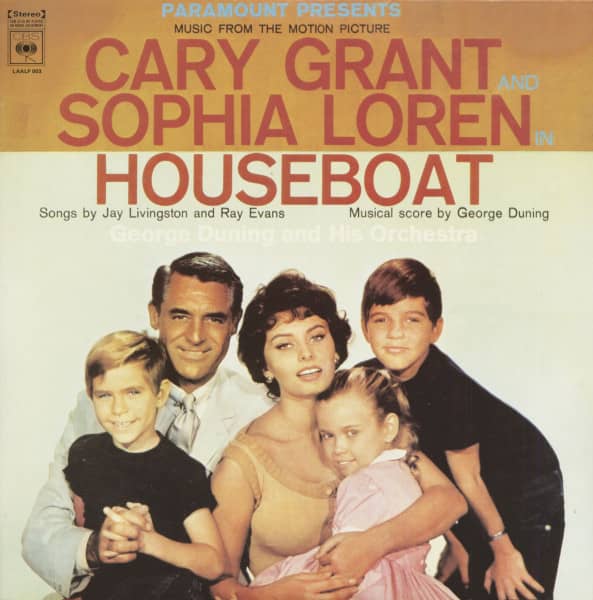 ​​(CBS) 17 tracks, Musical score by George Duning
A delightful romantic comedy such as Houseboat comes along all too seldom these days, particularly one graced by the insouciant performing of Cary Grant and the feline loveliness of Sophia Loren. These stars, together with an expert supporting cast and a script of unusual distinction, provide an altogether delectable account of how a widower and the daughter of a sym-phony conductor find romance and at the same time provide an unusual home for his children.
Producer Jack Rose and director Mel-ville Shavelson, who collaborated on the script, have provided a merry time for the actors and for the audi-ence, and at the same time have in-cluded two opportunities for Sophia Loren to sing. The songs were espec-ially composed for Houseboat by Jay , Livingston and Ray Evans, three-time Academy Award winners and compos-ers of the sprightly Broadway hit, Oh Captain!
Music for Houseboat, conducted in this recording by the composer was writ-ten by George Duning, one of Holly-wood's foremost musicians. In his score, he points up the frequent com-edy episodes with enormous skill, and gives poignancy to the dramatic se-quences in broad, lyric terms. Mr. Dun-ing studied music at the Cincinnati Conservatory of Music, and for eight-een years served as musical director of the Kay Kyser program. Since 1946, he has devoted his composing to motion pictures, and was thrice nominated for an Academy Award, for his scoring for Jolson Sings Again, No Sad Songs for Me and From Here to Eternity. In addition, he wrote the theme for Picnic. Here, in Houseboat, he has pro-vided a melodious and memorable score which blends splendidly with the ro-mance and drama and comedy that make it such a cinematic pleasure.