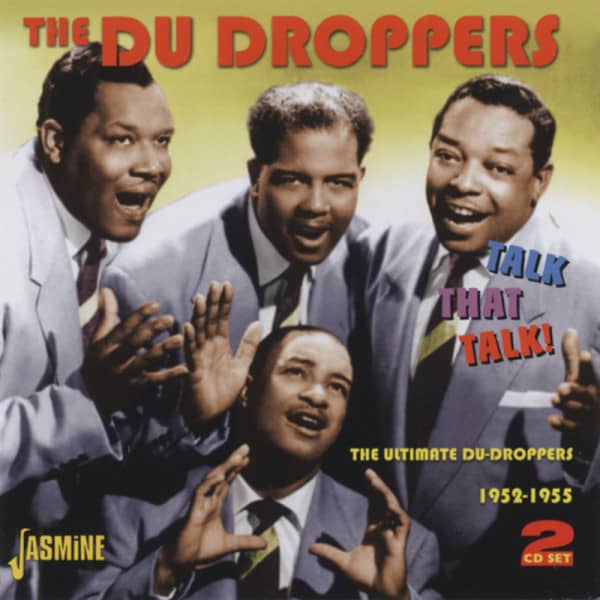 The Du-Droppers: Talk That Talk (2-CD)

Caleb Ginyard, Jr. was like the proverbial cat with nine lives. Known as 'J.C.' (for Junior Caleb), he'd served a long stint with The Jubalaires and a shorter one with The Dixieaires, scoring hits with both that reside on the first entry in this series. By the time he and the Harlem-based Du Droppers (brothers Willie and Harvey Ray, both capable of covering tenor and baritone, and bass Eddie Hashaw) united in 1952 and made their first single for Bobby Robinson's Red Robin imprint.

Already a solo name with two '51 singles of his own for Bobby Shad's Sittin' in With label, Big Bob Kornegay supplanted Hashaw as their bass vocalist prior to The Du Droppers making their move up to the big leagues by signing with RCA Victor. A&R man Joe Thomas urged Ginyard to write something for the quartet's first RCA session on February 17, 1953, and J.C. responded with the inordinately catchy (and somewhat bawdy) rocker I Wanna Know. None other than jazz saxman Ben Webster supplied the slinky intro, while Kelly Owens' rock-ribbed piano buttressed the quartet's dynamic, gospel-fired harmonies.

Being on RCA didn't work out particularly well for The Four Tunes or Robins, but the mammoth label did right by The Du Droppers. Their first release on the label sailed to #3 on 'Billboard's R&B 'Best Seller' listings (and #4 on the 'Juke Box' charts) during the spring of '53 (Kornegay chortled up a storm on the mellow B-side, Laughing Blues). It's not like they didn't have all sorts of competition; The Checkers covered I Wanna Know for King to no avail, and Robinson dug up two leftover masters from The Du Droppers' Red Robin days, Come On And Love Me Baby and Go Back. None of it mattered.

Ginyard and his cohorts had the last laugh when they answered their own question on I Found Out (What You Do When You Go 'Round There) at a May 8 session for RCA and watched it soar to an identical #3 'Best Seller' position that summer. 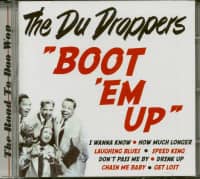