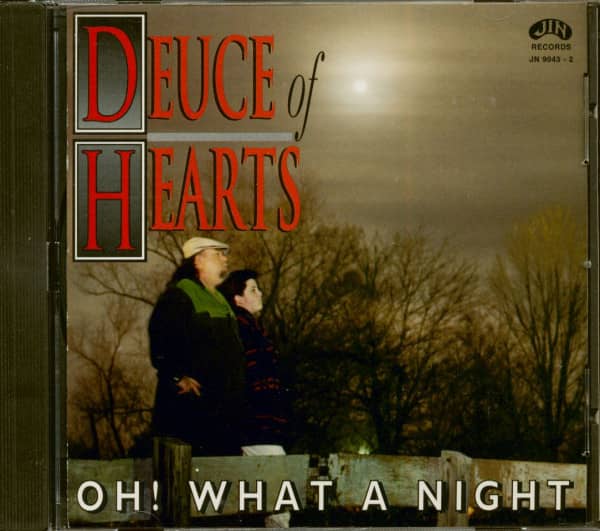 P Secure bonuspoints now
Description Review 0
Description
(JIN Records) 10 Tracks This Father & Son duo has been together since 1988. Gary has been a... more
Close menu

DEUCE OF HEARTS: Oh! What A Night (CD)

(JIN Records) 10 Tracks
This Father & Son duo has been together since 1988. Gary has been a singer/songwriter for 29 years while 15 year old Travis has been a drummer since the age of 3, a singer since he was 7 and a songwriter at 12 years of age. Their repertoire consists mostly of original songs and Swamp Pop, but also include Zydeco, 50's, Country and top 40. Their first single cassette, "Take My Hand" b/w "Time and Time Again", released in 1994, was very well received throughout South Louisiana, and both songs made the Top 10 playlists of several radio stations. It was this release that caught the attention of JIN RECORDS, and eventually resulted in this album release. This album contains all original songs written by both Gary and Travis. You can catch their performance anywhere in Southeast Louisiana. "Deuce of Hearts" thanks you for purchasing "Oh! What A Night".

Article properties: DEUCE OF HEARTS: Oh! What A Night (CD)