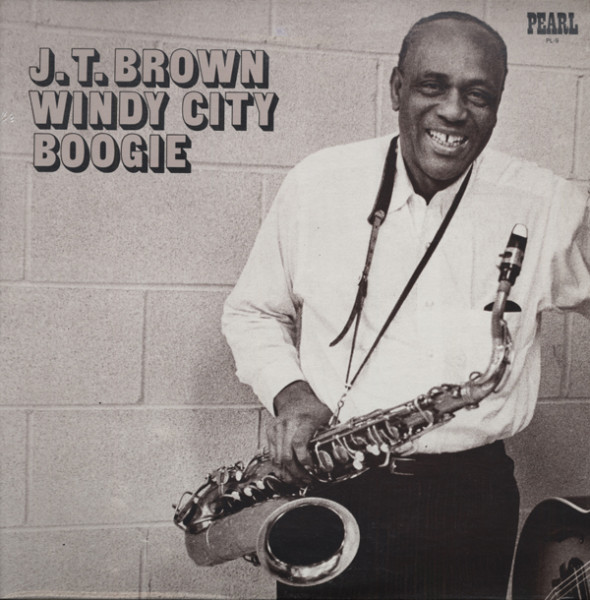 Please inform me as soon as the product is available again.
$12.30 *

There haven't been many Chicago blues horn men who remained blues musicians. Eddie Shaw and A.C. Reed are the main exceptions to the rule today but in decades past, that role fell primarily to the late J.T. Brown. J.T. Brown was, at any rate, a bluesman. By jazz stan-dards he was not a great instrumentalist. His lack of sophistication, subtlety and tonal variations prevented him from moving into more "progressive" musical cir-cles—if, indeed. he really wanted to. When J.T. recorded ballads the music usually came out blues. Fellow blues-men regarded his strong. swaggering delivery and bleat-ing tone with both admiration and comic delight. "He's the only man I know could make a horn sound like a nanny goat: says guitarist Jody Williams.

"And that's the only way he could blow. During the years when we were broadcasting at Sylvio's on Big Bill Hill's show, you could be half a block away and hear that horn." Brown was a colorful figure with an apparent fondness for nicknames. Various records were credited to J.T. "Blow It" Brown and His Harlem Btu-Blowers. J.T. Brown's Boogie Band, "Nature Boy" Brown and His Blues Ram-blers. J.T. "Big Boy" Brown, and the Bep Brown Orchestra. John T. Brown was born in Mississippi on April 2, 1918. son of Sam and Cecelia Rimmer Brown. "He used to be on the Rabbit Foot Minstrels: Little Brother Mont-gomery says. "They traveled all over. Old man Brown had the band. had a son named E.W. from Brookhaven, Miss. J.T. worked on the show with 'em. Louis Jordan was on that show" (.I.T. was apparently not related to the other Browns). Lee Jackson says. "Me and J.T. played together off and on about 20 years. I met him in Memphis." He adds that later, in Chicago, "We played at 39th & Indiana where Little Walter used to play, at the Rendezvous.

We worked out in Robbins, at the White Rose in Pheonix, and we'd sit in with J.B. Lenoir a lot of times:' By 1945 J.T. was recording in Chicago behind Roos-evelt Sykes and St. Louis Jimmy. and appeared with Washboard Sam, Eddie Boyd and Memphis Jimmy Clarke. He introduced drummer Jump Jackson to producer Lester Melrose. Jackson soon became a leading session drum-mer. and they often worked together, in the studio, in Chicago clubs, or on the road. J.T.'s first session as leader was in 1950 for the Harlem label. He and Grant "Mr. Blues" Jones split the vocals. The next year he heard that his friend Leonard Allen was starting a record label with Lew Simpkins. Lew had con-tracted Roosevelt Sykes and Robert Nighthawk for United's first date: Allen recalls: "Brown told me. 'If you put me on a session. you don't have to pay me no ses-sion costs: So he didn't get no money for it.

But Brown was the only one that sold records, with that honk he did!" He had been working with Little Brother Montgomery at the A&B Lounge at 63rd & Cottage Grove. But on the strength of "Windy City Boogie," J.T. put a band together and hit the road. Trumpeter King Kolax joined the band: "J.T. and I worked together about five or six months." he remembers. "We went to LaSalle. IL. Louisville. Montgomery, AL. It was Brown, myself, Art Tarry on piano, Hillard Brown on drums and Ernest Ashley on guitar, and he picked up a bass player out of Chattanooga at Harry Brown's place on East 9th Street. J.T. had an act and he could draw a crowd:' Brown was recording again for United in January 1952: so was the bass player from Chattanooga: Tommy Braden, who, with the Blazes, went on to become a leading R&B act for United after waxing a hit. "Mary Jo" (Delmark 704). Grant Jones. also joined the United roster for two dates in 1951 and 1952.

J.T. was able to continue recording with releases on J.O.B. and Meteor, and hooked up with Elmore James and Johnnie Jones. He had made enough of a name to occasionally assemble a group and travel. Jody Williams recalls playing in J.T:s band on a tour which also featured Johnny Moore's 3 Blazers with Charles Brown. Jody says, J.T. almost gave Johnny Moore a beating when he thought Moore was withholding $100 from him after a show at the Fort Wayne, IN. armory. He had a habit of comin' up short on the money. After an engagement at a club on Williams Street in St. Louis. a solemn-faced J.T. informed the band that the owner had cut their wages because it had been a slow week. When the angry band didn't fall for the story, J.T. agreed to pay them in full—but the next morning they learned he'd split for Chicago and left them stranded. Jody later accompanied Brown on the final United ses-sion at Boulevard Studios. Brown had auditioned a ballad called "Darling Patricia" for Leonard Allen. who explains. 1 cut it with Brown because I wanted to get the song for Art Wilkins 'cause Art seemed to express himself a little loft dif-ferent." St. Louis singer Wilkins' version appeared on Unit-ed's subsidiary label, States.

At least two more Brown songs were recorded by other United/States. artists: Wilkins did "Going Home To My Baby." and Arbee Stidham covered "I Stayed Away Too Long". The early '50s seem to have been J.T:s most success-ful years. All of his later recordings and tours were main-ly as an accompanist Brown's clarinet shines on a 1965 Muddy Waters session. In another liner note Jimmy Dawkins recalled a job with J.T. at a stuffy Michigan supper club in 1963: guitarist Willie Johnson accompanied Brown on a similar gig in Rock Island, IL "You couldn't play no blues in that joint. "We played stuff like 'Lady Be Good', 'How High The Moon'. 'Teardrops'..." So it was back to Chicago for the round of clubs, dances and shows. In January 1969 J.T. joined Fleetwood Mac on Blues Jam at Chess. Brown put his unmistakable blues saxo-phone sound on wax. and left as his last vocal perfor-mance. another rendition of his old gambling number. "Blackjack Blues". He died after lung surgery at Chicago's Michael Reese Hospital on Nov. 24, 1969.