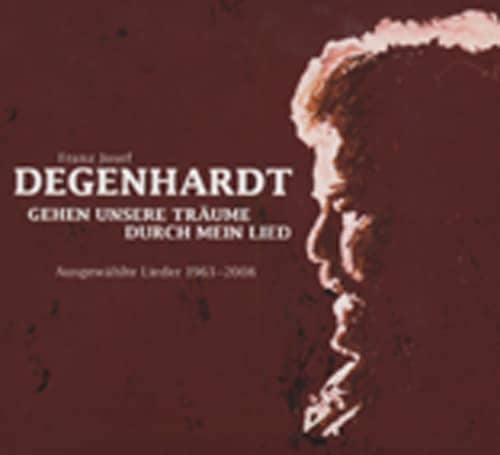 Franz Josef Degenhardt * 03. December 1931 - 14. November 2011 The lawyer Degenhardt, born in Schwelm in Westphalia, is more known for his songs (e.g. "Spiel nicht mit den Schmuddelkindern", 1965) than for his novels (e.g. "Zündschnüre", 1973). With his political convictions he does not hold back, he is once aptly described as a "poetic megaphone of the West German left". Degenhardt's texts urge change. At the end of the 60s, the "singing lawyer" increasingly appeared in the environment of the APO. The play "Vatis Argumente" also dates from this period. Franz Josef Degenhardt's LPs have all been released by Polydor since 1963. He has a close friendship with his producer Jimmy Bowien. Today he is probably the "longest serving" songwriter of the republic.

Franz Josef Degenhardt summed up the state of German song and singing culture in the mid-sixties with this song:

Our songs are dead
our old songs
Teachers have bitten them to pieces
Shortbehoste they clenched
brown hordes screamed to death
I stamped my boots in the mud.

That even sounds a little harmless, he says in retrospect today. "The late-born don't know that during the Nazi reign music was played from morning to night. That was a very musical time: Above all German folk music was sung, not so many fascist songs in the actual sense. I always found one of the most beautiful songs: 'It's already dark in the heath, / Let's go home. / We have cut the grain / With our shining sword ...'. It turned out, however, that the SS sang this song after their firing squads. That was no longer singable for me!"

Degenhardt, born 1931, had grown up with the Bündische Jugendbewegung, the youth movement. "For us, who came from the German song tradition, these were songs we liked very much. And anyone who grew up under such circumstances as I did, in an anti-fascist milieu, with a folk song tradition both from the workers' movement and from the bourgeois youth movement, was not indifferent to what happened with it. We liked the German vocal music. We suffered because the Nazis had destroyed them. We hated Germany - I will put it this way - because we didn't want to be confused with the Nazis. But we still wanted to reinterpret these songs, especially to develop them further in their artistic forms. And this finally succeeded on the Waldeck."