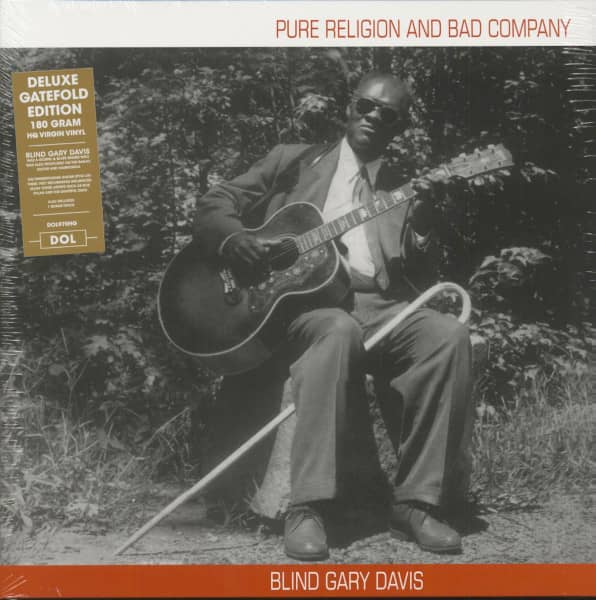 In the heart of Harlem, if you are lucky, you might chance upon Blind Gary Davis, gospel
Singer, preacher and brilliant guitarist, singing on a street corner. 138th Street is one of his
favourite streets, but he might be singing way up in the Bronx or miles away in the maze
of streets of Brooklyn. Unless it's pouring with rain, Blind Gary will be playing somewhere.
He knows the subways almost as well as he knows the fingerboard of his guitar, and travels
confidently and fearlessly—though he has been attacked more than once and has had his guitar
stolen. Gary Davis is a man with a mission: to spread the gospel by his singing and playing and
though he is sixty-six and the life he leads is a gruelling one, he has no intention of rearing.
At one time Gary Davis was a blues singer. He was born in a farming community some miles
from Clinton, Laurens County, South Carolina, in 1896. His family was very poor and from early
childhood he helped on the farm. The contact with older farm workers had the incidental result
of introducing him to musical instruments and he was barely five years old when he learned to
play the harmonica, soon picking up the rudiments of picking the banjo too. In 1903 he started
on the guitar which was only then gaining popularity, and soon became an able performer. In
subsequent years he learned to play for country barn-raisings, buck and wing dances and for
other social functions, joining a string band in Greenville in the neighbouring county, in about
1912. As he became more proficient he found he could live by his playing, and as the blues
became popular in the Carolinas he began to wander and lead a rowdy if dissolute life.
The 20's and 30's are years about which Blind Gary is reluctant to talk. He took the Seaboard
Line into North Carolina and met up with other blues singers, eventually finding a partner in
Fulton Allen—Blind Boy Fuller. Gary Davis was not born blind and the circumstances under
which he lost his sight he will not divulge. The incident seems to have occurred about 1930 and
when he partnered Blind Boy Fuller and his youthful harmonica player Blind Sonny Terry, the
three blind musicians had to depend on George Washington, the washboard player called 'Oh
Red', to act as their 'eyes'.
Perhaps it was the salutary effect of the incident that caused him to lose his sight that made
him turn to the Church for strength. Whatever the reason, he was ordained at Washington on
the Pamlico River off the North Carolina coast, in 1933. Two years later he made a number of
records for Melotone and Perfect and even included a couple of Blues amongst them—Cross and
Evil Woman Blues was one, although they were mostly religious songs. On some of these—Lord
Stand By Me for example—Blind Boy Fuller accompanied him and sang too, whilst Blind Gary
played second guitar to Fuller on some of his earliest records. Soon, however, he struck out on his
own and for the next few years he wandered all over the Carolinas, playing at camp meetings,
revival meetings, at country churches and in the streets, until he moved to New York in 1940,
where he has remained for the past twenty-two years.

Close friends of Blind Gary know he plays the blues, know that he can still hold his liquor
very well and know too that he is sincere in his religious convictions. They have tried to get
him to play the blues, to play buck dances and some of his country songs on record, but this
he has usually refused to do. But this selection of his recordings includes a number of secular
items presenting for the collector new facets of his artistry. Buck Dance and Devil's Dream are
guitar instrumentals which demonstrate Blind Gary's great instrumental ability and the country
roots of his music. The Stop Time basis of these instrumentals is of particular interest, whilst
Coco Blues has close affinities to the guitar solos of instrumentalists as varied as William Moore
and Elizabeth Cotton, recalling the easy, lazy guitar rags which were once a strong tradition in
the Virginias and Carolinas.
Years of street singing have strained Blind Gary's voice and most recordings of him have
been deliberately balanced so that his voice has appeared stronger than in fact it is, and closer
to Blind Willie Johnson's. On the present recording the balance of voice and guitar has been
faithfully preserved, but still the fierceness of Pure Religion comes powerfully across, whilst the
runs and arpeggios on the guitar, brilliantly picked with thumb and first and second fingers, are
breathtaking. Blind Gary makes use of various percussive effects, rapping on the box, tapping the
fingerboard and slapping the strings; at other times he echoes his voice with whining strings or
vocal-like slides. Listen for example to I Didn't Want to Join The Band. Here the blues heritage
has enriched his playing, as well as adding to his range of tunes: Moon Goes Down is derived
from Careless Love, whilst Runnin' To The Judgment owes much to Mama Don't You Tear My
Clothes. A little timidly Blind Gary even concedes his blues origins by singing Candy Man, the
blues song that Mississippi John Hurt and Blind Gary Davis sang, years before he 'got religion'.

Here then is a singular collection of recordings by one of the great folk guitarists of our
time, and one of the last of a remarkable tradition. For a few years yet, let us hope, this thin,
spare, hollow-cheeked blind man with his gold-rimmed glasses and his steel-tipped, nimble fingers
will be bringing his music and his conviction to the passers-by in the Harlem Streets. When he
ceases, no one will follow, and only such records as this will bear testimony to his talent.
Paul Oliver