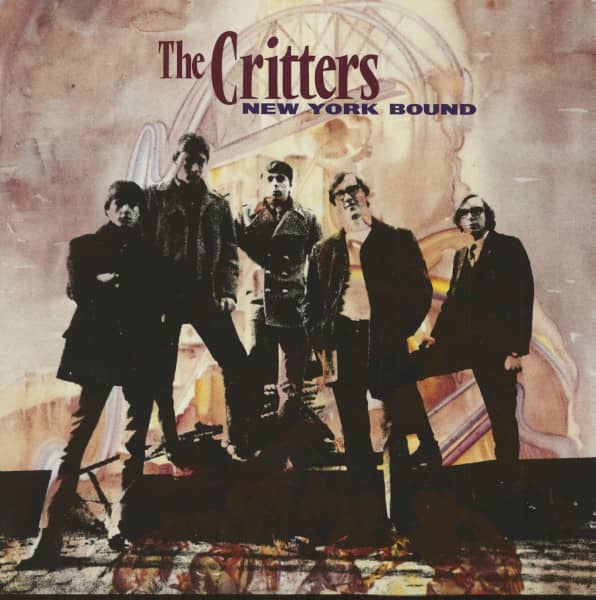 Learn more about The Critters
For one brief moment in the summer of 1966, it looked as though the Critters had hit the big... more
Close menu
"The Critters"

For one brief moment in the summer of 1966, it looked as though the Critters had hit the big time. Their version of 'Younger Girl' had figured on the Billboard chart and its follow-up had fared even better, suggesting that another New York favourite had been found. The Lavin' Spoonful were already, .questionably the city's hot attraction; indeed 'Younger Girl' was a John. Sebastian song, and the Critters stepped neatly in between the jugband music of their mentors and the Brill Building pop, thriving during that same period. The Critters came together in New Jersey sometime in 1964. Like their bhic-eyedceotemporaries, the Young Rascals, the group scuffled around various local clubs and dance halls, building up a following and eventu-ally attracting small indie labels. At least one single was released from this period when 'No-One But YouTI'm Telling Everyone' appear. OA Prancer 6001. However, it was when downtown Manhatten showed an interest that the Critters began to happen

The group signed with Kapp in 1965, working via production deal with Kama Sutra; coincidentally. the home of the Lovin' Spoonful. Kama Sutra also had close ties with New York's contract songwriters and this a m,ificent Jackie Its Shannon song, 'Children And Flowers', was CUE as the Critters debut single in November that year. The irresistible tune was perfect for the group's mixture of soft har-monies and folk rock, and it formed an ideal opening. That promise was fulfilled by 'Younger Girl' lifted from the Spoonful's debut album and one of John Sebasti.'s finest songs. Its effortless charm was also custom-made for the Critters who took the same ar-rangement and merely warmed up the sparse instrumentation of the original. Although a relatively minor hit (No42) it pitched the band into teen-niags, with photographs and life lines spread all around. Guitarists Jim Ryan and Don Ciccone were seen as the founders, having attended high school together in Plainfield. Bassist Kenny Gorka, a year older than the others, went to the same school while drummer Jack Decker was another local friend. Organist Chris Darway was the 'odd one out', coming from Brooklyn, but he had studied at the same school as Ryan. 'Mr Dieingly Sad' followed 'Younger Girl' and reached No 17. Their first self-pained topside, (written by Ciccone), it continued the Critters unassuming gentle power, as well as their growth as songwriters. Coupled with Ryan's `It Just Won't Be That Way', a song which merged the atmosphere of both the Red Bird label and the Beach Boys, this indeed was a remarkable single. All of these Kapp recordings appeared on "Younger Girl", the Critters' debut album. The remaining sides all appear to date from one marathon session ;1st July 1966), with Ryan, then Ciccone and Darway each making their own contributions. The album is a triumph, each cut merely reinforces and confirms the crafted excellence of the group: harmonious, melodic and beautiful, with a depth and total understand-ing of New York pop. Such skills placed them alongside the Left Banke and the Magicians (the latter of which included the Bonner/Gordon tram) as prime songwriters and performers. `Bad Misunderstanding', the Critters single closing 1966, boasted their most realised production yet. Curiously, however, it wasn't a group original, but carne from Pete Anders and Vinnie Poncia, house song-writers for Kama Sutra acts such as the Trade Winds and the Innocence (with whom they recorded). Anders and Porn-a had written and monied with Phil Spector, as well as scoring hits at Red Bird. Artie Ripp„k&R at Kama Sutra, suggested that they team with Don Ciccone, and several songs from the combination appeared, including 'Catch Me In The Mead, for the Trade Winds. Two of Don's own songs, 'There's Got To Be A Word' and 'Your Show Is Over were also cut by the Innocence. Anders and Ponca originally wrote and produced `Bad Misunderstand-ing' for an unissued album by the Goodtimcs, another Kama Sutra group, and the Trade Winds also took a crack at it on their lone LP. The Critters' version shared much of the same backing tracks, but the soaring voices were all theirs. Sadly, the single only reached a disap-pointing 55; one wonders just what the group felt when Ciccone's 'There's Got To Be A Word' reached a more respectable 34 the same month. The same production/writing tie-up was continued on 'Marrying Kind Of Love', a song Anders and Poncia had penned with Doc Porous, intending it for the Young Rascals. Their version was left th the wn, as would another by the aforementioned Goodtimes, while the Critters' version, although a minor triumph, was met by stoney consumer resistonce; a total flop. This was and the group was brilliant and the flipside 'New York Bound' deserved an accolade itself. Written by Ryan and Darya, its simpler more straight-forward sound (Anders and Poncia only worked on the 'A' side) formed an ideal contrast, showing a harder edge for this homage to their hometown. Anders and Poncia also produced the Critters' next topside, 'Don't Let The Rain Fall Down On Me. Written by Jimmy Ryan, it continued the style forged on the last two singles, where the tradition of white New York street harmony (Dion and The Belmonts, the Four Seasons etc) became more prevalent in the Critters' approach. Indeed the soaring harmony at the close is pure Frankie Valli, although the song itself is built in a much more ambitious. 1967 way. Chris Darway's 'Walk Like A Man Again' is a more edgy, spiky piece, and different from the usual Critters' sound. His efforts on their debut album had also differed from the general group approach, so this was not entirely unexpected. 'Don't Let The Rain Fall Down On Me' returned the Critters to the charts, albeit a lowly 39. It proved to be their final hit, the group's last offering for Kapp 'Dancing In The Street' recorded in September 1967, made no impression whatever. Indeed the group couldn't even muster a flip side, and 'Little Girl', a track cut just after the 'Children And Flowers' session was pulled out to make up the coupling. A further track, 'Hun Of Love (Head Of Stone)' was recorded the same day, suggesting a second single was intended - if so it was never released.

On October 14th Record World announced that Project 3, a somewhat obscure outlet was moving into the teen market. To further this mission, they'd signed the Critters to a long-term deal and mottling was set to begin immediately. The article even ran to the group's new line-up -Jim Ryan (guitar), Bob Spinella (organ), Kenny Gorka (bas;; and Jeff Pelosi (drums). Although some articles suggest that Chris Darway was still a member in 1968 (perhaps he came and went) what is clear is that Don Ciccone had left the band. Certainly he'd been drafted, indeed some of his co•writing tasks with Anders and Poncia meant that the duo had to call in at his base, and this doubtlessly accelerated his departure from the Critters. The loss of such a strong songwriter, as well as the Kama Sara backroom staff, took its toll on the Critters and they slipped into 3 kind of anonymity. This was .fortunate as the albums they cut for their new label, "Touch And Go" (PR 4001) and "Critters" aka "Critters 3" (PR 4002), while less satisfying than that first gem, had their moments. Following the third album the group just seemed to fir2le out, with the individual members moving off in separate directions. Jim Ryan then worked as a session guitarist, contributing to Carly Simon's albums "Anticipation" and "No Secrets- amongst others. However the cycle seemed to become almost complete in 1974 when Out Ciccone re-emerged to replace Clay Jordan in the Four Seasons. Ciccone's presence in his new group cannot be underestimated; it was his drive and en-thusiasm that put than back together in 1979 following a two-year break-up. Both he and Jim Ryan have since recalled the Critters music with deserved affection, a reputation for excellence this collection can only alliance.