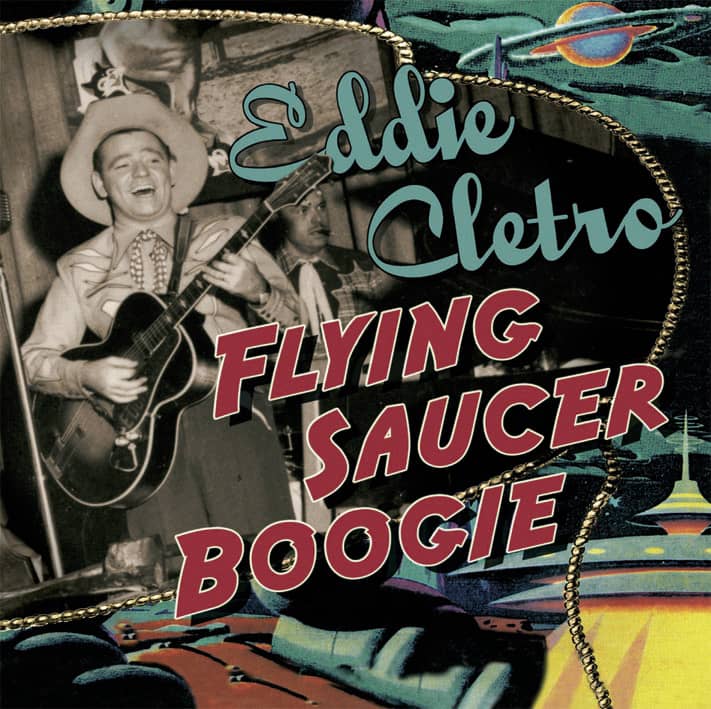 Cletro went from strength to strength in this era, however. His fame was largely confined to Southern California, but the LA scene in which he worked in these years was a major one, increasingly the center of the American entertainment industry.

Most of the press devoted to Eddie Cletro, both at the height of his career and later in retirement, focused on two factors that were deemed highly unusual at the time. The first of these was that he was a native of Trenton, New Jersey. Since many western stars came from backgrounds far removed from the geographical West – Roy Rogers, for example, was from Ohio – this is far less unusual than press accounts at the time implied. Besides, Cletro had been in California since age three. Even if it did matter whether a western singer really came from the west, Cletro's Northeastern roots were a mere technicality. Still, he felt the need early on in his heyday to fall back on a venerable tradition and invent a more Western background, claiming to be from Colgate, Oklahoma.

The second unusual circumstance noted in contemporary publicity was that Cletro had moved seamlessly into western music after a number of years as a straight pop entertainer. This was technically true, but it, too, was misleading, for Cletro had begun his career as a youth around LA leading his own western-cum-hillbilly outfit.

Eddie Cletro had no hit records, but he did have a great voice and a great band – the Roundup Boys -- and several of his records have long been highly sought after among collectors, particularly the great, rocking double-sider from 1952, First Class, Second Hand Woman b/w Flying Saucer Boogie.  These and all of his recordings for Lariat, Imperial and Sage and Sand are featured here, including sides backing the smooth voiced western star Eddie Dean (heard here in a quasi-rock 'n' roll mode with Rock And Roll Cowboy). Also included, a session that paired Cletro with the well-travelled Canadian-born yodeler Donn Reynolds, and the Christmas record he and daughter Diane made in 1955. As a bonus, there are several classic tracks chosen from the dozen on which Eddie and the Roundup Boys backed Rose Maddox that same year.

Edward Oliver Cletro was born to Charles and Marion Cletro in Trenton, New Jersey on October 28, 1918. Later publicity made much of Cletro's Irish heritage and the family name had originally been O'Clethero. He'd moved West to the Los Angeles area by in the early 1920s. By age eight or nine, Cletro, by his own admission "a lonely, only child," began fooling around on ukulele. A year or two later, he bought his first guitar for $5 – a kindly music store guitar teacher let him have the instrument for a dollar down and a dollar a month.

Cletro was soon making money from music. "Just a kid on the pike in Long Beach,"  he recalls. "And another kid, younger than me, said 'Can I join you,' and the next thing I know I had 3 or 4 guys. I wound up with my own quartet. I started booking rotary clubs, chamber of commerce luncheons, market openings – anything I could promote."

These early musical forays were in the realm of hillbilly and western, inspired by area stars like the Beverly Hill Billies, who featured the golden voiced, influential singer Ezra Paulette, and especially the Sons Of The Pioneers, who rose to prominence locally during 1933-4. In fact, the name he chose for his band combined the names of both of these groups: The Sons Of The Hillbillies. The group included Billy Rowley on guitar, Oliver Kime on bass, Ed Cundiff on accordion and Clarence Field on fiddle, and lasted several years.

Despite his early preference for western music -- and despite the fact that there was plentiful work in that field in the LA area -- Cletro gradually eased toward pop music. He developed into both a skilled vocalist and rhythm guitarist and joined the LA local of the musicians union in 1938, the same year he married Wynne Ward.

Ward was also a performer. "Wynne and I met in high school,"  Cletro told a local newspaper reporter in 1973. "We used to play all the amateur nights because they always had cash prizes. Wynnie had a roller skating act. She used a portable wooden floor and she wowed the audience by bending backwards to pick up a handkerchief with her teeth – they loved it."  The two eventually joined forces and Wynne later sang and occasionally played accordion with her husband until they started a family after the war.

In 1940, Cletro's first significant professional break came when he successfully auditioned as singer-guitarist with the society combo Eddie Grauer & his Aniwa Boys. He recalls that the Aniwa Boys had relocated to California after establishing a rep on the East Coast. The group was led by pianist Eddie Grauer and featured a two-violin front line. Although the sound was purely pop, the band's twin violin sound anticipated the smooth twin fiddles that Cletro would feature with his own Roundup Boys a few years later. One of the Aniwa violinists, Bill Hopkins, was a capable jazz fiddler, while another, Joe Moshay, later became a popular LA area society bandleader in his own right. Though the band did not record commercially, it did record a number of transcriptions prior to Cletro's tenure with the band, featuring his predecessor, Wray Sherrill, on vocals and rhythm guitar.