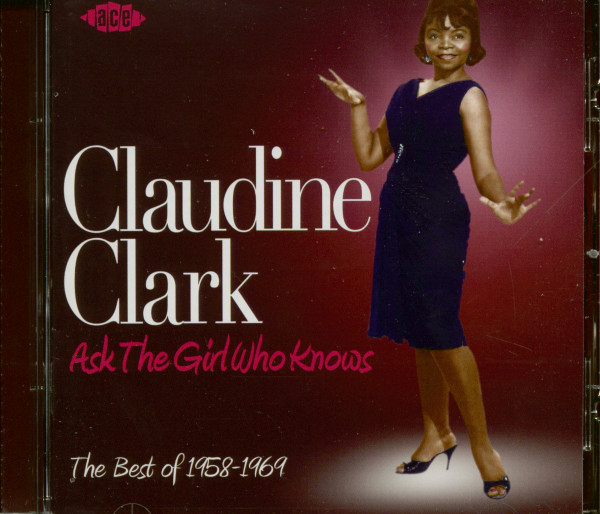 (Ace Records) 24 tracks with 16 page booklet. Everything you wanted to hear by Philadelphia's mulit-talented and mysterious Claudine Clark, including some alternate takes, pseudonymous recordings, great previously unissued tracks and Northern Soul rarity.
-
“I see the lights, the party lights...I see Tommy and Joe and Betty and Sue – whoa oh! There goes my boyfriend too...I wanna go, I wanna go...” – never did a girl sound so upbeat and lively about not being allowed to go out partying as twenty-one-year old Claudine Clark did!

Long overdue, this fab collection of the mysterious and energetically voiced Ms Clark’s best recordings kicks off with an alternate take of her only chart hit ‘Party Lights’, and features tracks released under the names Joy Dawn and Sherry Pye. Then there’s the previously unreleased and often speculated upon ‘Buttered Popcorn’ (yes, it is the pre-hit Supremes track), an as near as dammit Supremes cover in ‘Goodbye Mama’ (currently an expensive in-demand 45 on the Northern Soul club scene) and another unissued track, ‘A Sometimes Thing’. All of this makes this CD a dream come true for girl group fans, as it collects Claudine’s best work from 1958-1969 into one tight, 24-track hour of doo wop, soul balladry, dance tunes and great and pure fun music.

As Mick Patrick says in his booklet notes, Claudine’s status as a one hit wonder does her a disservice and by track three, aural evidence soon backs up that statement. Mick tells us that Claudine was born in Macon, Georgia (the city that also gave us Little Richard, James Brown and Otis Redding) and Philadelphia, Pennsylvania raised and that she recorded for the city’s great labels like Chancellor, Jamie, Swan and Fayette. So it’s no real surprise that she was often given (and in fact gave herself, as she had a hand in writing a significant number of her own releases) a similar sound to that great hit-making Philly girl of the early 60s, Dee Dee Sharp.

Claudine’s Swan release ‘Hang It Up’ almost sounds like a pastiche tune written for a 60s revival movie or a musical and, according to a press release issued by Chancellor Records, she had written “a rock’n’roll operetta”, so I wonder if in fact that’s where the origins of the track lie? The versions of ‘Party Lights’ and (its original A-side) ‘Disappointed’ are previously unissued longer alternate takes, ‘Easy To Love’ is great slow drag soul and ‘The Strength To Be Strong’ is in an extraordinary waltz tempo epic (unsurprisingly it was a Dave Godin favourite). The 1969 title track is closer to Claudine’s Georgia roots, with her sounding wonderfully soulful with a distaff take on a song Otis could have easily recorded. No surprise then that it was re-released by Atlantic after its initial outing on the Match label. Add in the extremely odd ‘Walking Through A Cemetery’, the great ‘Telephone Game’ (its much better flipside), both sides of her 1958 release on Herald and a handful of tracks plucked from her “Party Lights” album and the whole package is a must have addition to your already filled-to-groaning girl group CD shelf.

Claudine Clark, who is currently riding the Hit Charts, was born in Macon, Georgia of a non-musical family. At on early age Claudine showed an interest in music and was encour-aged by her parents to study guitar and organ. The youngster quickly developed a proficiency in two instruments and began thinking seriously of a musical career. Her first break came when she won a musical scholarship to Coombs College in Philadelphia. The lark acquired the basic knowledge at Coombs which later became invaluable to her. After receiving her B.S. degree in musical composition, Claudine made a full-fledged attempt to make it as a songstress. A television shot in Wilmington brought her to the attention of some New York wax execs. After a false start on two labels, the lark signed a recording pact with Chancellor Records. The rest is history. When not doing deejay hops and club dotes, Claudine spends her spare time writing poetry and plays.