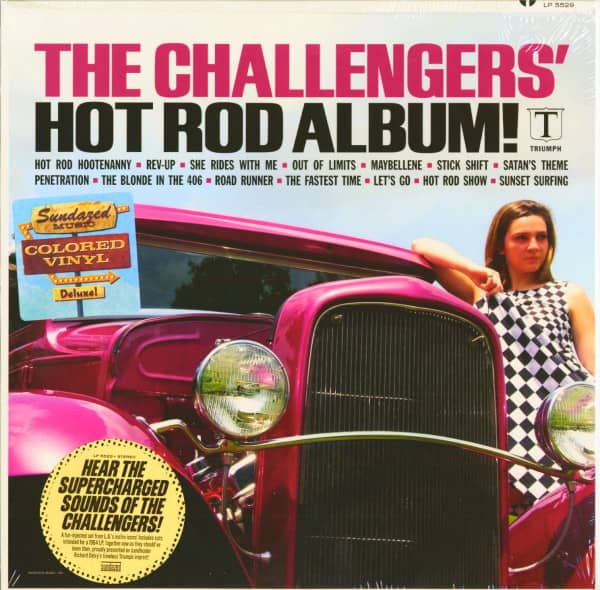 (Sundazed) 14 tracks 1964 - Limited Edition.
Among surf groups of The Golden State, none rode a higher wave than The Challengers. Formed in 1962 by drummer Richard Delvy, who had been the beat keeper for The Bel-Airs, The Challengers were an instant success. Their 1963 LP, Surfbeat, became one of the genre’s biggest sellers.
Reportedly recorded in under four hours at World Pacific Studios, the LP was released on Vault and helped solidify the surf sound. In early ‘60s California, surf and car culture were joined at the baggy-clad hip.
This convergence was reflected in the music of the surf bands, many of whom began to devote equal time to automobile anthems. By now something of a surf rock entrepreneur, Richard Delvy moved to capitalize on this trend by recording hot rod songs with The Challengers. Unfortunately, an intended 1964 LP of car tunes never came together and the fast moving decade left the surf ‘n street scene in the incense ashes. Finally, Sundazed and Richard Delvy’s Triumph imprint have combined forces to create the LP that never was. This nitro-fueled set collects the bands asphalt arias all on one platter NOW as they should have been THEN. Mastered from the original stock analog tapes, these songs go from zero to 60 mph in 33 1/3 rpm! Rev up that turntable, put The Challengers’ Hot Rod Album on the starting line and GO! GO! GO!