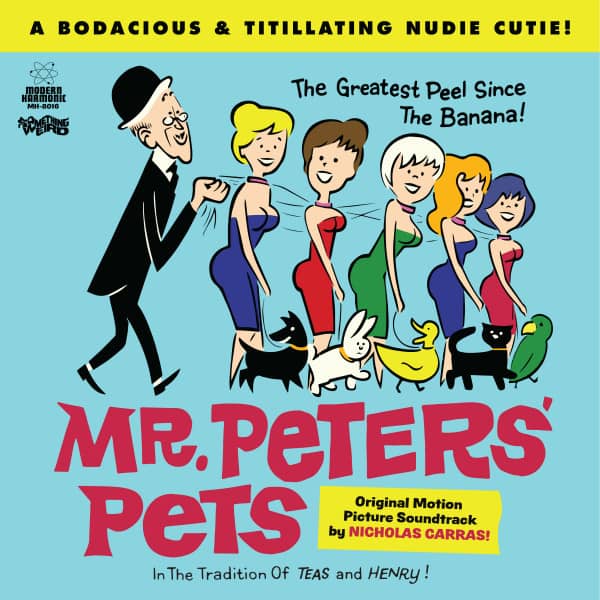 (Modern Harmonic) 9 tracks, colored Vinyl, plus DVD (movie)
Bongo Skins & Skin Flick!
• A top notch jazz record that just happened to become an adult film score!?!
• Lots of bang for your bucks, pressed on Third Man yellow vinyl!
• Includes a Zine-Style insert with a great set of notes from a bodacious pair of writers, and a DVD of the film plus a special edit to sync with your LP!

A jazzy romp through the titillating ‘60s. On 'Mr. Peters’ Pets', composer Nicholas Carras ventures deep into the bongo-crazed percussion world of exotica! This is a jubilant jazz record with serious swagger.

The 'film' on the other hand, is a low-budget adult comedy (a genre quaintly called a Nudie Cutie) from 1962. It’s possibly the silliest, dumbest, most ridiculous Nudie Cutie movie ever made! Follow Mr. Peters as he turns into various household pets for the sole purpose of getting a close and personal view of their well endowed owners!

Included here is a zine-style insert with a voluptuous set of notes and a DVD of the full feature film, with a special Modern Harmonic edit made to sync with your LP!