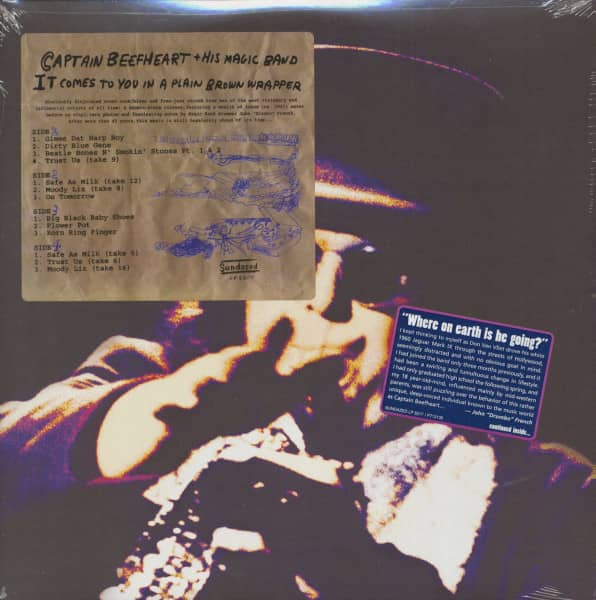 Captain Beefheart & His Magic Band: It Comes To You In A Plain Brown Wrapper (2-LP)

One of the most exciting aspects of reintroducing so much rare and incredible music to the world is being able to finally make available material that’s been in label-vault limbo since the day it was recorded, vital sounds locked away from the deserving ears of the legions of devoted music fans we at Sundazed count ourselves among. But when we’re able to present previously shelved material by one of the most visionary and influential artists of all time, in exceptional fidelity, with the look and feel of the packaging that the artist originally meant it to have?

Well, then, that just takes everything to another level completely—a level that’s certainly been reached with the exclusive vinyl-only issue of Captain Beefheart and His Magic Band’s mind-blowing lost 1967 sessions. Recorded in part as the follow-up to Safe as Milk, Beefheart’s debut from earlier that year, the world-shattering material on It Comes to You in a Plain Brown Wrapper was rerecorded, truncated, and issued—without the Captain’s approval—as Strictly Personal in 1968.

Mastered directly from the original analog tapes and featuring a wealth of unedited takes never before on vinyl, Sundazed’s stunning gatefold double-LP release of this infamously enigmatic opus contains inside rare photos and fascinating, exhaustive liner notes by Magic Band drummer John “Drumbo” French. So here, then, is Captain Beefheart and His Magic Band’s second album of gloriously disjointed avant-rock/blues and free-jazz skronk, presented just as nature—and the Captain—intended. Even after more than 40 years, this music is still hopelessly ahead of its time—or, as one-time Magic Band member Ry Cooder once described it, “right on time.”

Article properties: Captain Beefheart & His Magic Band: It Comes To You In A Plain Brown Wrapper (2-LP)