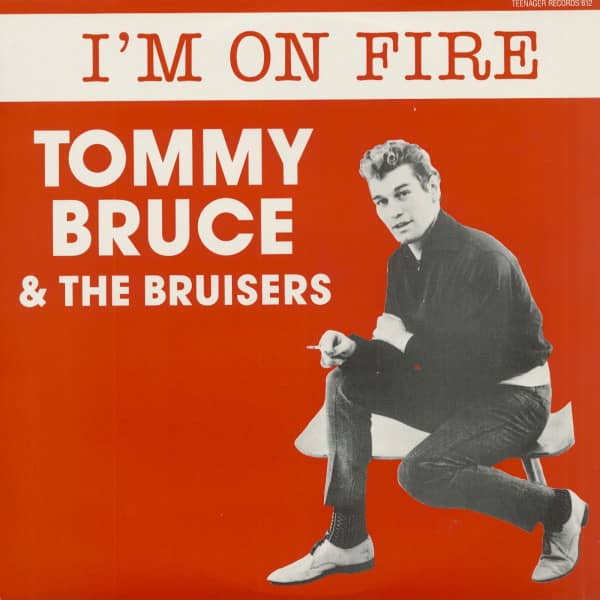 (Teenager) 18 tracks by Tommy Bruce & The Bruisers feat. his version of 'Ain't Misbehavin'' which became an unforseen hit in 1960 in the British Hit Parade. God only knows how he made that, as he sounds after he had smoked a truckload of cigarettes before he got into the studio! Included on this album are Teen Rockers and real Rockers like 'I'm In Fire', Shakin' All Over', 'Got The Water Boilin'' and a lot more! (Bear Family - nf)
Tommy Bruce emerged as one of the singing phenomena of 1960 - an inexperienced, happy-go lucky Cockney, who suddenly found himself transported from the anonymity of his job in London's Covent Garden fruit market, to the bright lights and acclaim that invariably accompany a smash hit record success. His sudden boost to fame has almost a fairy-story flavour about it. For Tommy had never even considered the possibility of show business as a career - his life, in fact, was devoted to his job at the market, where he worked as a driver's mate, starting at six o'clock every morning-and to his remarkable collection of pets. five dogs, two budgerigars and a parrot! By chance, he met up with a young actor named Barry Mason, who was immediately struck by Tommy's appearance. It occurred to him that the young man would be a sure-fire hit with the teenagers - if only he could sing! Tommy scoffed at the suggestion, and would not even consider making a demonstration record.

But eventually he was persuaded to do so and, somewhat sheepishly, waxed a song called Ain't Misbehavin' - chosen because it was the only song he knew! The disc was subsequently played to Columbia recording manager, Norrie Paramor, who at once realised that here was something different. Tommy's approach had a novel, tongue-in-cheek slant - and while admittedly he was no great singer, from the technical sense, there was an unmistakable appeal about his bright-and-breezy, gravel-throated handling of lyrics. Norrie's foresight was well justified. for Tommy's disc of Ain't Misbehavin' shot to almost the top of the hit parade, and established the young East-Ender to such effect that he was offered a starring summer season on the strength of it. On this disc, Tommy tackles seventeen more numbers including his now familiar Ain't Misbehavin'. And he proves conclusively that the warmth of his personality will maintain the novelty of his interpretations for a long time to come.