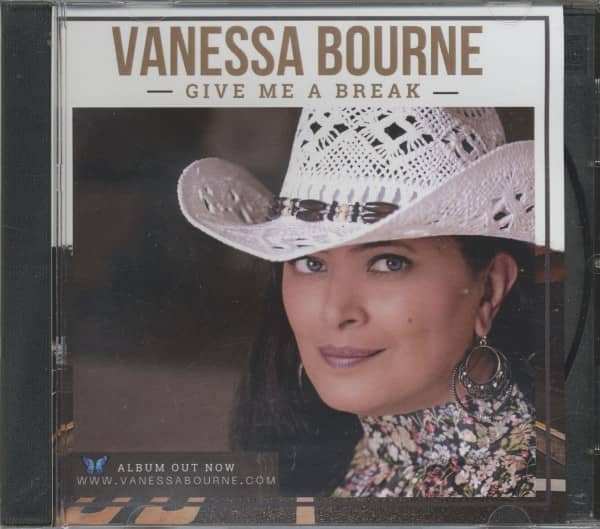 Vanessa Bourne: Give Me A Break (CD)

Vanessa Bourne, best known for her traditional country music, has held true to traditional country for years. This year, she traveled to Nashville from her Phillip Island home in Melbourne, Australia, to record her first album, YOUNG AT HEART. Her soft, smooth voice and soothing tones come from her childhood home filled with the sounds of Merle Haggard, Patsy Cline, George Jones, Loretta Lynn and other greats. After capturing the true essence of country music, she found her perfect producer Curt Ryle in Nashville, Tennessee, USA; and she trusted him and his experience to keep her music in the traditional county. Her first steps in traditional country music were singing cover songs, and about 2 years ago she moved on to writing her own songs and becoming original.
After the great success of her first album Young At Heart, Vanessa Bourne did it again in 2022. She has just returned from Nashville with a brand new album, Give Me A Break, for which she once again draws on the talents of Tommy White, Wanda Vick and Dennis Holt, to name a few, and she continues to work with Curt Ryle to produce her music because, as she says, "he's not just a great producer, he's a blessing!

Her songs are admired for their perfect diction, their loyalty to traditional country, and their gentleness and passion in telling stories from the heart. This is what makes you believe when she says: "What my heart whispers, my soul sings".

Article properties:Vanessa Bourne: Give Me A Break (CD)