The Blue Sky Boys: The Sunny Side Of Life

Article properties: The Blue Sky Boys: The Sunny Side Of Life 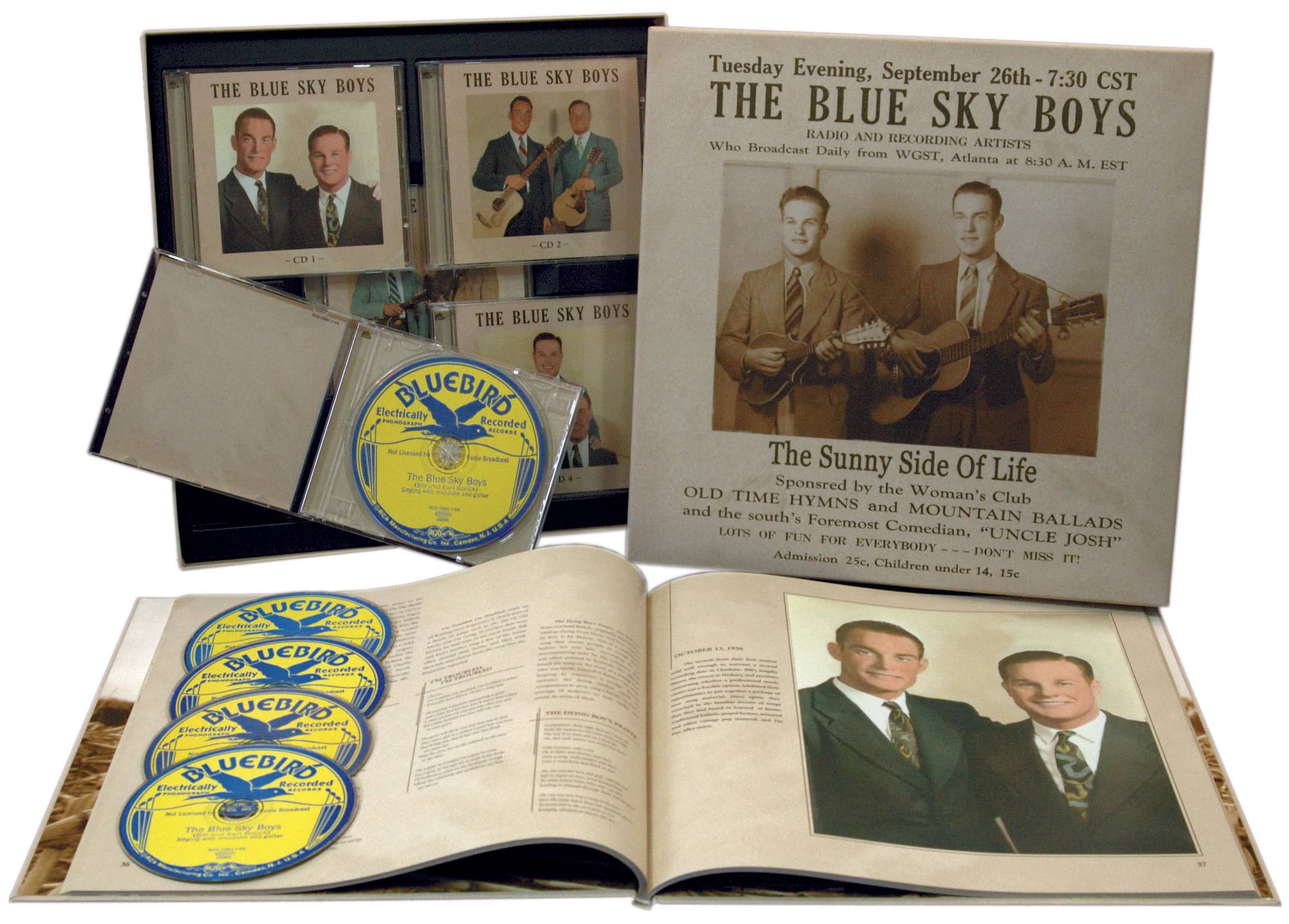 t's hard to believe that the Bolick Brothers were only sixteen and eighteen years old when they made their first records in 1936. We hear their boyish, innocent voices singing with a wisdom and maturity far beyond their years, songs about tragic love, murder, and suicide. They went on to fashion a sound and style of harmony unlike any ever heard before in country music, qualities that have remained unmatched. Over a career that, except for four years of military service during World War II, extended until 1951, Bill and Earl Bolick bequeathed a legacy of such songs as The Sunny Side Of Life, Why Not Confess, Kentucky, and Behind These Prison Walls Of Love that are still sung by bluegrass and old-time country musicians today. A wonderful achievement for a duet that went into professional music essentially because the $10 a week they received for their first gig was better than the $3.50 or less that was available for menial jobs back home!

Originally named Bolch, the Bolicks were heirs to the German migration that came down out of Pennsylvania over the Great Wagon Road into the Piedmont South in the late eighteenth century. Descendants of those migrants still live in the southern Piedmont, which extends from western Maryland to northwestern Georgia. Bill and Earl's ancestors settled in Catawba County, a region of heavy German concentration, and Bill now lives very near to the place where he was born. Serious, disciplined, and often austere in conduct, these people were mostly Lutherans, but Mennonites and various pietistic groups also thrived among the migrants who ventured south. Most became farmers, and evidence of their efficient husbandry can still be seen in the region. Over time, however, just as many in the area around Hickory became workers in the furniture or cotton mills. Hickory in fact still prides itself in being the furniture capital of America.

The Piedmont, that broad geographical expanse that lies between the coastal plain and the mountains, was a region of social, economic, and ethnic diversity. A medley of people, mostly English, Welsh, Scots -Irish, and Huguenot French came in from the east and north where they met and intermarried with the Germans. Lutherans, Presbyterians, Baptists, Methodists, dissenting sects, and Holiness people established churches and set out to convert the region, but found more often than not that believers moved very easily from one group to another. Although the mountains can be seen looming in the West, and have always exerted a romantic fascination for people everywhere, the Piedmont has had its own special history. Comprising about 35% of the state, the North Carolina Piedmont long remained rural, but in the late nineteenth century became a diversified region of farming, milling, lumbering, and railroad activity. It was a meeting ground for agricultural and industrial enterprises, and for rural and urban folkways. In short, it was the region where the Old South confronted the New, a crossroads or intersection of change. Railroads came; towns and cities appeared along the 'fall line,' that imaginary line that marked the place where water from the western rivers rushed over the falls on the way to the coast. Rural people, mostly from agricultural backgrounds, came into the emerging cities from nearby hinterlands and from the mountains to work in the tobacco, cotton, and furniture mills

These newcomers came in contact with, and usually embraced, town ways —ready-made clothes, new fashions, labor-saving commodities, department stores, vaudeville and movie houses, and innovations in technology. Automobiles became increasingly available after World War I, and radio stations began to appear in such towns as Danville, Roanoke, Charlotte, Raleigh, Durham, Chapel Hill, Greenville, and Columbia, booming their signals through the surrounding countryside, down along the Atlantic Coast, and sometimes well into the mountains (musicians of course also went to nearby stations in Atlanta, Asheville, Bristol and other towns that were contiguous to the Piedmont). Fledgling musicians flocked to the stations from all over the rural Southeast during the twenties and Depression years, sharing their songs and styles with each other, and building networks of personal appearances through their broadcasts. The Piedmont, in short, was one of the historic but often overlooked birthplaces of American country music.

Bill Bolick was born in West Hickory, North Carolina on October 29, 1917, and Earl on November 16, 1919, to Garland and Annie Elizabeth Hallman Bolick. Bill and Earl were the fourth and fifth children in a family of four boys and two girls. Mom Hallman came from a farm 'out in the sticks' in the adjoining county of Caldwell, but went to work in a cotton mill when she was about nine years old. She in fact even met her future husband, Garland, in the Ivey Mill where he was working at the age of twelve or thirteen. She once told her son Bill that conditions in the mill and mill village were no worse than they had been out in the country, and that she had worked in the fields as a small girl. Garland Bolick, who grew up in Catawba County, left the mills much earlier than did his wife, and worked for a short time in the furniture industry, largely in the pay of Hickory's most prominent industrial proprietor, George Ivey. Almost everyone in West Hickory worked for Mr. Ivey, who was the owner of an iron foundry, the Southern Desk Company, maker of school and church furniture, and the cotton textile mill where Garland and Annie Elizabeth had met. By the time Bill and Earl were born, Garland had found employment in the local post office, a position that carried greater respectability and a measure of economic security than would have been scarcely possible for a mill worker. The Bolicks in fact were one of the few families in their area of North Carolina who owned a telephone, radio, and automobile.