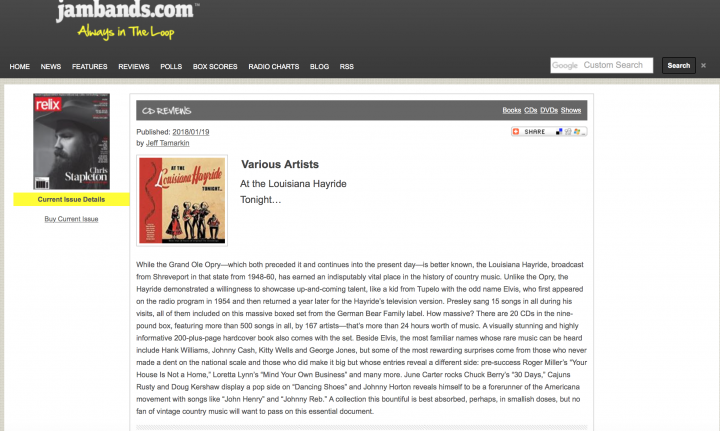 Jan. 11-25, 2018
The Lost History of the 'Louisiana Hayride' Show
A 20-CD set perfectly captures the show where rock & roll began
On October 16th,1954, Elvis Presley made his first appearance on Loui-siana Hayride, performing "That's All Right," recorded weeks earlier. "They've been looking for some-thing new in the folk-music field for a long time," the radio show's host Frank Page told the 19-year-old. "And I think you've got it." Sixty-plus years after that mo-ment, Presley's revolutionary rock & roll may not seem so radical, but on Bear Family's enormous new box set, At the Louisiana Hayride Tonight, it's possible to hear the world start to change. Compared to its role model, Grand Ole Opry, Louisiana Hayride was an upstart, happy to take chances on unknowns

GOOD ROCKIN' TONIGHT Presley and band on Hayride, 1955
such as Presley and Hank Williams. Producer Martin Hawkins compiled the 20-CD set from hundreds of hours of recordings, taking pains to "strike a balance between known and unknown artists, regulars, visi-tors and one-time hopefuls." Hawkins intended to re-create ffi the experience of a postwar country radio barn dance, so the box is pep-pered with ads, games and chatter. =8 E▪ 'x Hearing legends like Williams, George Jones, Johnny Horton, Kitty Wells and Johnny Cash within the a= context of their emergence makes < them sound fresh and underscores mu. not just how they found something .0 new in the folk-music field, but that 2t,▪ ^, they were part of this tradition. STEPHEN THOMAS ERLEWINE ?.8