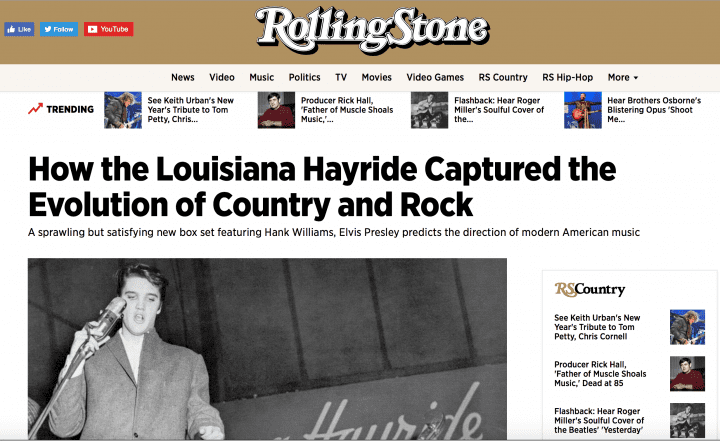 The Louisiana Hayride was one of dozens of syndicated radio broadcasts scattered across America in the wake of World War II. Most of these have been forgotten to all but historians, but the Louisiana Hayride endures, albeit not to the extent of its rival and role model, the Grand Ole Opry. Based out of Nashville and founded in 1925, the Opry embraced its role as a standard-bearer, whereas the Hayride was an upstart, happy to take a chance on unknowns. This eagerness meant the Shreveport-based radio show and jamboree acted as an incubator for hungry young artists like Hank Williams and Elvis Presley, the two Hayride-endorsed singers whose success opened and closed the door for the program.

Hear Hank Williams' Five Most Haunting Performances
On the 65th anniversary of his death, Rolling Stone Country looks at five of the country icon's most chilling vocal deliveries
By boosting the kings of country and rock & roll, the Louisiana Hayride is guaranteed a footnote in American musical history, but Bear Family Records' enormous box set At the Louisiana Hayride Tonight intends to elevate the show from the trenches to the foundation of American music. At 20 discs, supported by a heavy hardbound book, it is certainly weighty, but it's by no means complete, which is perhaps the right decision for a program that was a weekly institution in the 1950s. Instead of offering a complete chronicle of the show's history, At the Louisiana Hayride Tonight explains the somewhat convoluted program through detailed text and audio that intends to re-create the experience of hearing the show, either on the transcription discs submitted to radio stations or through excerpts of the touring packages that would pack halls throughout the South.

This is a difficult task because, unlike the Grand Ole Opry, the Louisiana Hayride wasn't anchored to one location. They would broadcast out of Shreveport, usually cutting sessions in the studio for transmission later in the week, then assemble a cadre of artists for a touring package. Such an arrangement was common in the days before rock & roll rewrote the music business rules, turning hit singles into a definable source of revenue. Prior to that, the money was in the live show, so the Hayride would sign exclusive deals with singers in hopes of drawing a crowd. Often, the Opry would poach acts – Hank Williams was lured away once "Lovesick Blues" took off, then returned once his alcoholism made him a risky bet for Nashville – but the fact that the Hayride introduced new talent was no small thing. If they didn't have the appetite for the new, it's possible that the direction of modern American music would've followed a different course.

Setting aside Hank Williams and Elvis Presley – which is enough to earn the Louisiana Hayride its place in history – the program also catapulted Slim Whitman, Jim Reeves, Kitty Wells and Johnny Horton to stardom and provided a platform for Eddy Arnold, Faron Young, Johnny Cash and George Jones, singers who helped shape the parameters of pop and country music in the back half of the 20th century.

The fascinating thing about listening to At the Louisiana Hayride is that it's possible to hear the new world emerge from the old. The compilers took pains to reconstruct the cheerful corn of the radio program, using the first disc as an effective fanfare introducing all the album's musical and cultural themes, then peppering the box with ads, station IDs, games, chatter and ephemera that wind up evoking an era better than the music itself. All this shuck and jive doesn't just seem like an artifact of its time, it feels like a throwback to the early days of the 20th century, when a night of entertainment included jokes and stories – anything to keep the audience engaged, really. At times, At the Louisiana Hayride effectively conveys this hard sell, but usually everything glides thanks to the smooth introductions of Horace Logan, the host and producer who was only too happy to claim the show's success as his own. In his liner notes, Colin Escott effectively punctures the myths Logan peddles in his 1998 memoir Elvis, Hank and Me, a book where the radio announcer claims credit for the success of any singer who crossed into the Hayride's orbit.

Escott's dismantling of Logan's stories isn't a matter of spite, but rather ensures that the historical record is as accurate as can be. To that end, his work finds the ideal home in At the Louisiana Hayride, where the sublime sits alongside the sweetly mundane. The sequencing, which follows the contours of the original broadcasts, have period wonders vying with icons, which is how history works: it takes a while to take stock of even the most seismic events.

Immersing oneself in At the Louisiana Hayride Tonight – not an easy prospect due to its size, even though it's ultimately a worthwhile use of 22 and a half hours – it's hard not to think that Hank Williams opened the door for Elvis Presley, who then ushered in rawer music across the board. Williams still seems like a live wire in his performance. Some of his peers, like Curley Williams, also are kinetic and exciting, but Williams cuts through the show that the Louisiana Hayride was determined to provide. Presley debuts on the disc where Hank fades away and it's hard not to notice the passing of the torch: it's not just that Elvis loves R&B, it's that there's a fearlessness to his performances that not even Williams could match.

In his wake, even such pure country artists as George Jones wound up tapping into that primal energy, and acts like Johnny Horton would try to split the difference between rockabilly and honky-tonk ("Honky Tonk Hardwood Floor"). Not every act would follow Presley's path precisely – most adhered to the hillbilly elements of rockabilly ­­– but the majority attempted to reckon with the fallout, whether it was covering other rock & rollers (Jerry Kennedy tried to bring Gene Vincent's "Be-Bop-A-Lula" back to the country) or eschewing the cornpone flair so commonplace at the dawn of the Fifties. After Elvis, these down-home routines started to seem quaint.