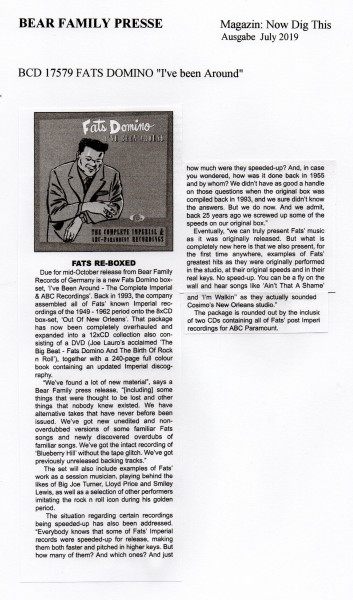 FATS RE-BOXED Due for mid-October release from Bear Family Records of Germany is a new Fats Domino box-set, 'I've Been Around - The Complete Imperial & ABC Recordings'. Back in 1993, the company assembled all of Fats' known Imperial rec-ordings of the 1949 - 1962 period onto the 8xCD box-set, 'Out Of New Orleans'. That package has now been completely overhauled and expanded into a 12xCD collection also con-sisting of a DVD (Joe Lauro's acclaimed 'The Big Beat - Fats Domino And The Birth Of Rock n Roll'), together with a 240-page full colour book containing an updated Imperial discog-raphy. "We've found a lot of new material", says a Bear Family press release, "[including] some things that were thought to be lost and other things that nobody knew existed. We have alternative takes that have never before been issued. We've got new unedited and non-overdubbed versions of some familiar Fats songs and newly discovered overdubs of familiar songs.

We've got the intact recording of 'Blueberry Hill' without the tape glitch. We've got previously unreleased backing tracks." The set will also include examples of Fats' work as a session musician, playing behind the likes of Big Joe Turner, Lloyd Price and Smiley Lewis, as well as a selection of other performers imitating the rock n roll icon during his golden period. The situation regarding certain recordings being speeded-up has also been addressed. "Everybody knows that some of Fats' Imperial records were speeded-up for release, making them both faster and pitched in higher keys. But how many of them? And which ones?

And just how much were they speeded-up? And, in case you wondered, how was it done back in 1955 and by whom? We didn't have as good a handle on those questions when the original box was compiled back in 1993, and we sure didn't know the answers. But we do now. And we admit, back 25 years ago we screwed up some of the speeds on our original box." Eventually, "we can truly present Fats' music as it was originally released. But what is completely new here is that we also present, for the first time anywhere, examples of Fats' greatest hits as they were originally performed in the studio, at their original speeds and in their real keys. No speed-up. You can be a fly on the wall and hear songs like 'Ain't That A Shame' and 'I'm Walkin" as they actually sounded Cosimo's New Orleans studio." The package is rounded out by the inclusic of two CDs containing all of Fats' post Imperi recordings for ABC Paramount.