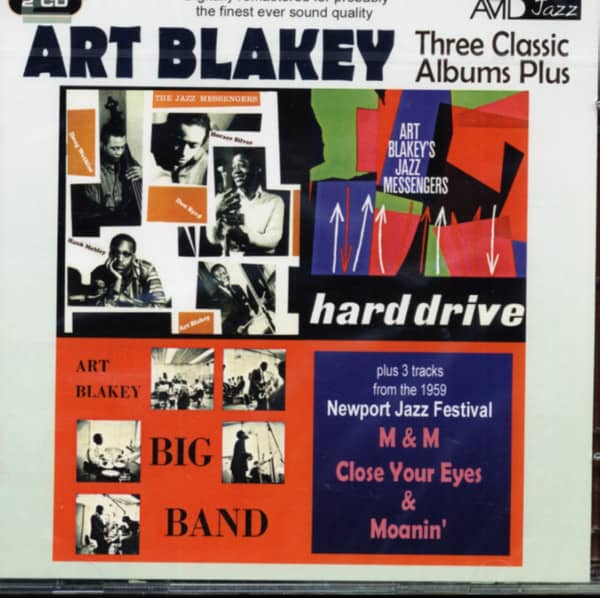 P Secure bonuspoints now
Description Review 0
Description
The remainder of the first CD consists of the album Hard Drive by the 1957 line-up of the Jazz... more
Close menu

The remainder of the first CD consists of the album Hard Drive by the 1957 line-up of the Jazz Messengers . This takes us into an airier sound world, where the individual musicians are free to relax without the bombast of a large ensemble. The star soloist is Johnny Griffin, whose solos swing easily while showing off his prodigious technique. DEO-X typifies the Jazz Messengers style: set in motion by Blakey's explosive drums leading into the trumpet/tenor sax blend which was the group's hallmark for so long. Junior Mance's sure touch is an integral feature of the rhythm section.
The first seven tracks of the second CD feature the 1956 version of the Jazz Messengers, when Horace Silver was still in the band. His solo on Nica's Dream is outstanding, but then he wrote this attractive tune which has understandably become a jazz standard. Silver also wrote the interestingly-chorded Ecaroh. Hank Mobley wrote three of the seven tracks on this LP, including Hank's Symphony which actually highlights Art Blakey's varied drumming skills. You can't say that Art was backward in coming forward!
The compilation closes with three tracks recorded at the 1959 Newport Jazz Festival. M &amp; M is another Mobley composition, in exactly the kind of bebop mode that suited the Messengers. Close Your Eyes has a simple but effective arranged introduction of the type which made a neat contrast with the group's solos. Lee Morgan goes to town on this one. Pianist Bobby Timmons' tune Moanin' gets a groovy performance with a righteous gospel feel. These three final numbers each last for at least nine minutes, letting the musicians stretch out. 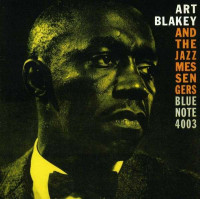