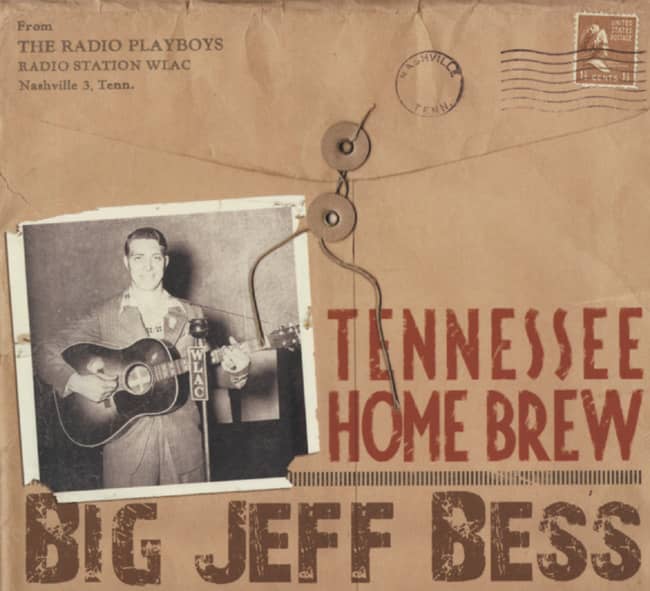 Grover Franklin Bess was born in Ashland City in Cheatham County, Tennessee on 2 September 1920. At some point people took his initials, G. F., and transformed them into 'Jeff'. Ashland was farming country a few miles northwest of Nashville sandwiched between the Cumberland River and the highway to Clarksville. It was not a city, more a collection of farms.

Jeff's parents were Perry Bess from Ashland City and Beatrice Newman, known as Sally, whose parents came from Arkansas. Some Bess family research has indicated that the Bess's came originally from the Boston area and that Bess may derive from immigrants named Bosch. Perry's middle name was Franklin, after president Benjamin Franklin, a tradition that carried on through Jeff to his son Steve. Jeff was the fourth of five children after his older sister and two brothers, Pearlie, Bud, and Johnnie, and ahead of his younger sister Francis.

Steve Bess told me, "Dad's parents were small farmers, growing tobacco and corn, vegetables, raising hogs and cattle. Just 40 acres, they were poor farmers. There were only three or four families in Ashland; the Newmans, the Brinkleys, and so on, and they all worked on the land." The population census for 1930 shows Perry Bess living and farming on Baxter Road with his wife and five children, next to the Rediker and Millican families and close by the Knights, the Thomas's and the Hyde's, all farmers. Practically everyone listed was born in Tennessee, and so were most of their parents before them save for a few incomers from Kentucky, the Virginias, or Ohio. The Thomas's however, came from England. Steve Bess said: "Dad told me how rough it was coming up during the Depression; one year all they had to eat was potatoes and cornbread. He wouldn't take a bite of cornbread in later years. When he was old enough he had to be out there suckering and cutting tobacco and that was backbreaking and he wanted to get away from that, being bent over all day with a knife to cut the sucker off each plant. He started to take an interest in music. He told me he saw it as a way to get off the farm."

Quite how Jeff came to be interested in music is unclear. Steve remembered that "Papa Bess played banjo, old style, just chording it. He could pick a little with his thumb but I'm not sure whether dad took an interest as a young kid. One of the Newmans played guitar on his porch after coming in from the fields, and that fascinated dad and he decided to get a guitar. He mainly taught himself though he was shown some chords from another feller in Ashland."

This would have been during the mid-1930s and it was not immediately a way off the farm. Jeff worked in the lumber mills, and he drove a truck for a wholesale grocery business. Then, when he was 19, Jeff married Emily – real name Emma - Rediker from a neighbouring family. Steve said: "My parents were married in 1939. Mom was from Ashland City and her father owned a grocery store so they were well-off, relatively". Jeff and Emily had a daughter, Judith – known as Judy – in 1940 and their son Steve was born in Ashland in 1942. Emily also had a son from an earlier marriage.

At some point in the mid- to late-'30s Jeff became proficient enough on the guitar to join up with other aspiring musicians. As Steve said: "He started playing out, and he met other people and eventually he went off to play music in the tent shows and fairs." Jeff told a reporter from 'The Tennessean' in later years that he was ten years old in 1930 when "I sold enough Lancaster seed to buy my first tiny guitar. Later I traded it in for a bigger one and joined a tent show, but I always wanted to get into radio". 'The Tennessean' reported that Jeff "came to Nashville at the age of 16 in 1940 to play with Roy Lucas and his Rhythm Rangers on WLAC radio." Since Jeff was in fact 20 years old in 1940 it is more likely that he told the reporter he'd started playing music aged 16, and that he'd managed to get himself onto the radio around 1940. 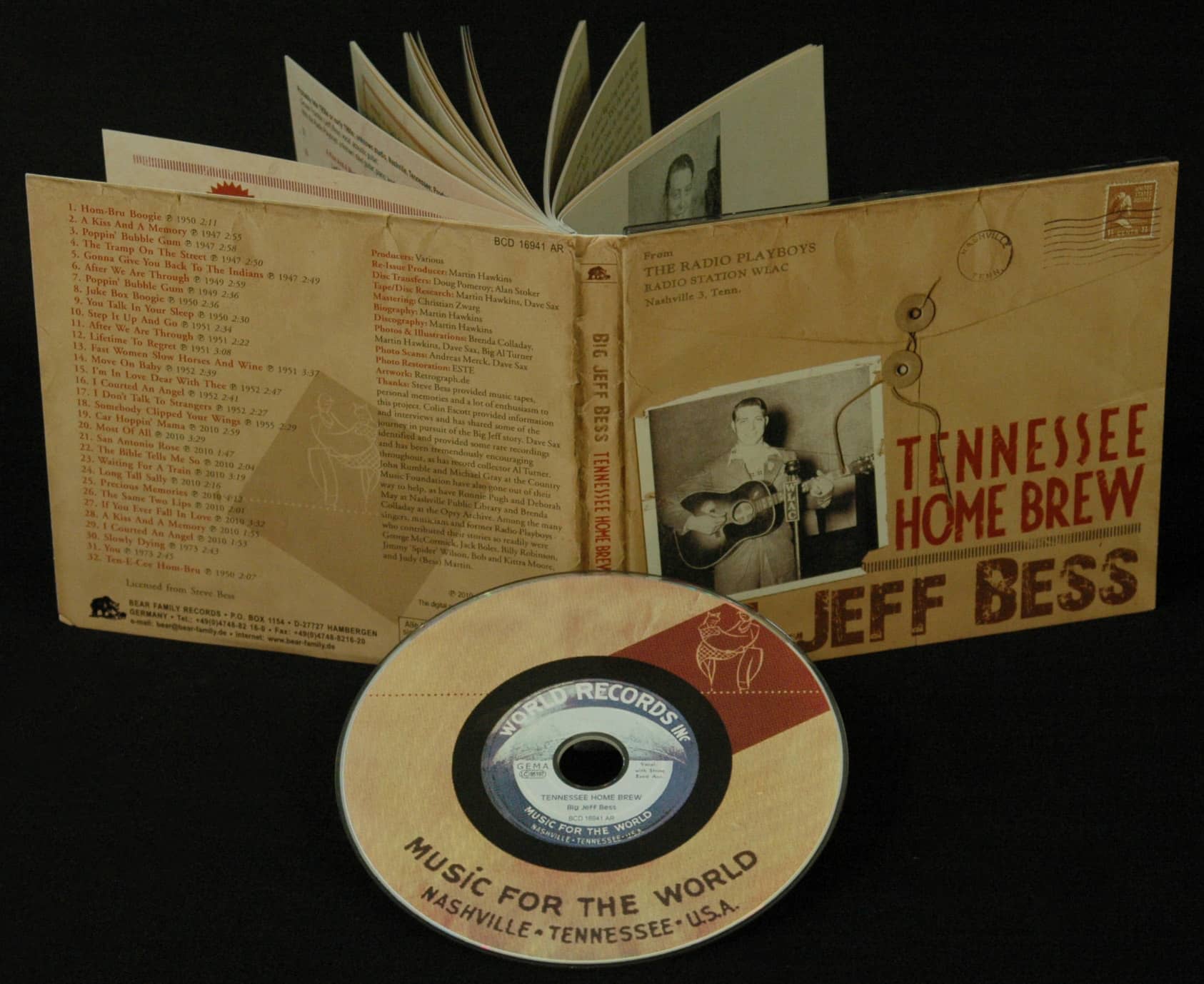 racing Big Jeff's early radio career is not easy but we can pick him up at various points along the way through the radio schedules listed in newspapers of the time. In 1940, when Jeff said he first appeared on the radio, there were just three radio stations in Nashville - WSM, WLAC, and WSIX - supplemented by small stations in surrounding towns. Jeff apparently fitted into folk and gospel music shows aired early morning, lunchtimes and in the later afternoon, a pattern that was already established on all three stations.

Jeff's WLAC radio biography from 1946 confirms that he did start there at the beginning of the '40s, saying: "Jeff started his radio career five years ago and since that time he has made lots of friends and hopes to make more. He has played on several radio stations, such as WLAC, WSIX, WNOX, WAPO, WOZ, WHOP and many others. Jeff is a boy that likes all sports. Jeff is a country boy and that is the way he wants you to take him. Jeff plays guitar, bass fiddle, and tries to play all the others." Another biography published a couple of years later adds: "Jeff has been a farmer and a truck driver from the time he was ten until he was twenty years old, when he started his radio career at WLAC. He later went to WSIX and from there came back to WLAC with his own band. Since that time they have played at various stations such as WEBQ, Harrisburg Illinois, WAPO Chattanooga, then to Knoxville at WNOX where they appeared on the 'MidDay Merry Go Round' and 'Tennessee Barn Dance'. They then returned to WLAC where they have been since June 1946 and can be heard twice daily at 7 a.m. and at 5.15 p.m. Jeff and his Radio Playboys also play shows where they may be seen in person, such as schools, theaters, auditoriums, ball parks and for round and square dances. Jeff's favorite sport is hunting and fishing and motorcycle riding. Jeff is 6 feet 2 inches, weighs 210, has dark hair and blue eyes and loves everybody".

Looking at weekday radio schedules, WLAC had a couple of hours each morning billed as the 'Morning Varieties' and the 'Ranch House Melodies'. It appears that the Roy Lucas Band and Jeff worked on these shows. Writing in his biography 'Nashville Nostalgia', local historian E D Thompson recalled his days as a musician on WLAC. "In 1941 when I was aged 16 my accordion teacher Fred Murff found me a summer job on a new radio show. The program was to be called 'Ranch House Melodies', a fifteen minute country and western musical show. In those wartime days the program following Ranch House Melodies was Big Jeff and the Radio Playboys". It is possible that Thompson attributed the name Radio Playboys to the band at that early stage because they were so well known later on.

Apart from Roy Lucas it is not known who Jeff worked with in the early '40s and it is probable that he filled in on the 'Varieties' and the 'Melodies' shows variously as a solo act, as part of a duet and as a member of several groups. Although they had a young family, sometimes Jeff's wife was part of the show too. Steve Bess told me: "Emily worked with dad as 'Little Peggy Sue' – she played accordion and sang on the radio with him for a while. She would sing songs like 'Little Red Wagon' and 'Tumblin Tumbleweeds'. Mother and Judy and I would all sing those songs at home too when we kids were small." Jeff was not at home during the day because he had a day job as well as radio work during the war years. Steve said that Jeff "had high blood pressure and they wouldn't take him into the Army. In world war two he worked in a bomb factory in middle Tennessee."

During the war years, the hillbilly headliners on WLAC were Texas Daisy and the Chuck Wagon Gang while the Rovin' Cowboy was on WSIX. On the day WSM moved the Grand Ole Opry show to the Ryman Auditorium, 5 June 1943, Big Jeff would probably have been found as part of the 'Sunshine Melodies' show or the 'Music For Breakfast' show on WLAC or maybe even as a member of The Kentuckians who held forth on WSIX at 12.30 lunchtimes.