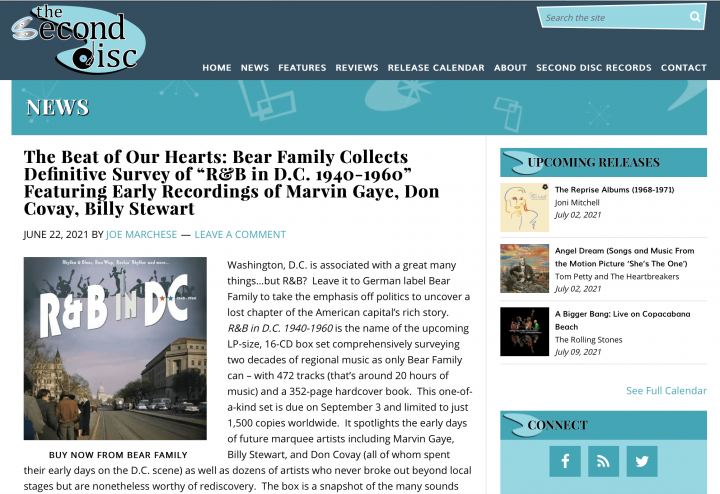 Washington, D.C. is associated with a great many things…but R&B? Leave it to German label Bear Family to take the emphasis off politics to uncover a lost chapter of the American capital’s rich story. R&B in D.C. 1940-1960 is the name of the upcoming LP-size, 16-CD box set comprehensively surveying two decades of regional music as only Bear Family can – with 472 tracks (that’s around 20 hours of music) and a 352-page hardcover book. This one-of-a-kind set is due on September 3 and limited to just 1,500 copies worldwide. It spotlights the early days of future marquee artists including Marvin Gaye, Billy Stewart, and Don Covay (all of whom spent their early days on the D.C. scene) as well as dozens of artists who never broke out beyond local stages but are nonetheless worthy of rediscovery. The box is a snapshot of the many sounds percolating in broader American culture during those years – not just “R&B” per se but swing, doo-wop, rock-and-roll, and soul, too.

The seeds of R&B in D.C. 1940-1960 were planted in 1960 when Bear Family founder Richard Weize approached roots music radio host Jay Bruder about curating a 6-CD overview of R&B from the area. But Bruder’s journey with this music started much earlier, and his six decades of record collecting led Bear Family to proceed with this much larger, truly definitive account.

To fully bring the era to life, Bruder interviewed the surviving artists and key personnel from this period of D.C. music history, and made considerable use of microfilm of newspapers from the time. The set’s accompanying hardcover tome introduces readers to local heroes including Lillian Claiborne of DC Records, Ben Adelman of Empire Records, and Bill Boskent of KRC Records, and also traces appearances in the D.C. area by such well-known figures as future Atlantic Records founders Ahmet Ertegun and Herb Abramson.

R&B in D.C. also functions as a study of the African-American music community of Washington, D.C. in those segregated times. Bruder has explored the music that emanated from vaudeville houses, nightclubs, restaurants, bars, roadhouses, churches, amateur hours, and even cruise boats sailing the Potomac. By the late 1950s, national talent scouts were converging on Washington; Bo Diddley took an interest in Billy Stewart and “Little” Bobby Parker as well as in The Marquees which then featured Marvin Gaye, Reese Palmer, and Chester Simmons. Lloyd Price (“Personality,” “Stagger Lee”) relocated to D.C. to form KRC Records with Bill Boskent and Harold Logan. In addition to all of the rarities, the box features such well-known songs as The Clovers’ “Love Potion No. 9,” The Senators’ “Wedding Bells,” and Price’s “Georgianna.” The tracks are all sequenced in order of release. Below, you’ll find a Soundcloud sample of the 1952 DC Records release “When Two Horn Motley Gets Hot” from The Heartbreakers with Frank Motley and His Crew.

Editors John Broven, Dan Kochakian, Colin Escott, and Dick Lillard all joined Bruder to create this exhaustive chronicle. Bear Family also notes the key contributions of drummer TNT Tribble, singer Reese Palmer, and vocal group coach Lawrence Berry, all of whom sadly passed away before the box set’s release. Master tapes have been utilized when possible (including the 1951 RCA Victor sessions by Tribble, Frank Motley, The Heartbreakers, and Jimmy McPhail) but hundreds of recordings for which no master tapes survive have been transferred and restored by Doug Pomeroy for this release.

This massive account of a fascinating period in American musical history arrives from Bear Family on September 3. Visit Bear Family here to view the complete track listing and to pre-order. We will update with Amazon links once they go live.​