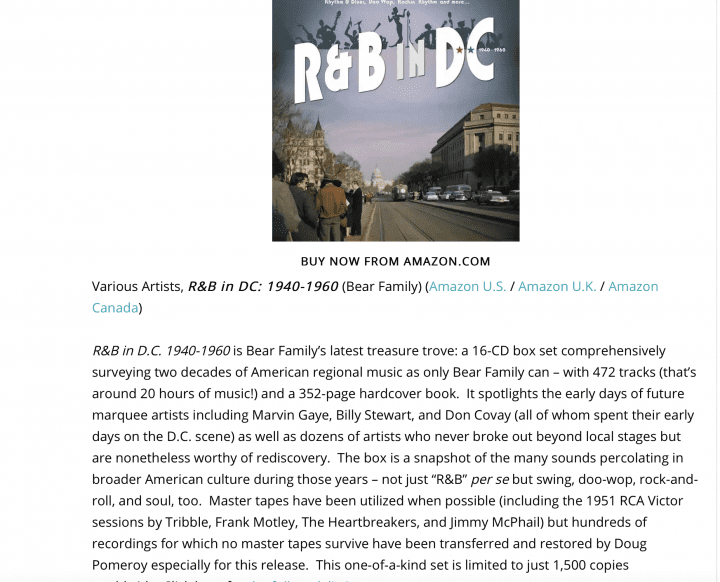 R&B in D.C. 1940-1960 is Bear Family’s latest treasure trove: a 16-CD box set comprehensively surveying two decades of American regional music as only Bear Family can – with 472 tracks (that’s around 20 hours of music!) and a 352-page hardcover book. It spotlights the early days of future marquee artists including Marvin Gaye, Billy Stewart, and Don Covay (all of whom spent their early days on the D.C. scene) as well as dozens of artists who never broke out beyond local stages but are nonetheless worthy of rediscovery. The box is a snapshot of the many sounds percolating in broader American culture during those years – not just “R&B” per se but swing, doo-wop, rock-and-roll, and soul, too. Master tapes have been utilized when possible (including the 1951 RCA Victor sessions by Tribble, Frank Motley, The Heartbreakers, and Jimmy McPhail) but hundreds of recordings for which no master tapes survive have been transferred and restored by Doug Pomeroy especially for this release. This one-of-a-kind set is limited to just 1,500 copies worldwide. Click here for the full track listing.