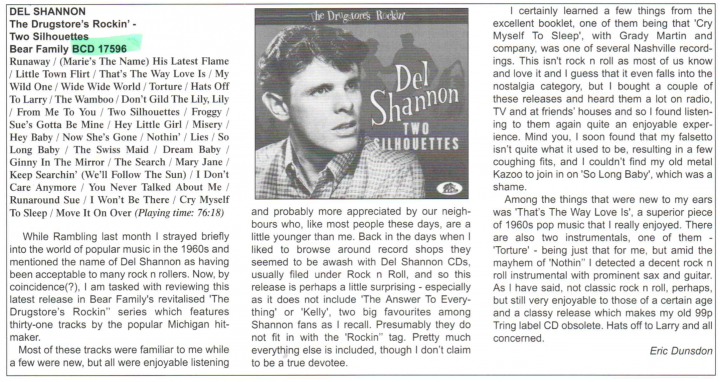 DEL SHANNON The Drugstore's Rockin' -Two Silhouettes Bear Family BCD 17596
...like most people these days, are a little younger than me. Back in the days when I
liked to browse arni Inc! rarnrri chnnc thaw
mentioned the name of Del Shannon as having been acceptable to many rock n rollers. Now, by coincidence(?), I am tasked with reviewing this latest release in Bear Family's revitalised 'The Drugstore's Rockinn series which features thirty-one tracks by the popular Michigan hit-maker. Most of these tracks were familiar to me while a few were new, but all were enjoyable listening seemed to be awash with Del Shannon CDs. usually filed under Rock n Roll. and so this release is perhaps a little surprising - especially as it does not include 'The Answer To Every-thing' or 'Kelly'. two big favourites among Shannon fans as I recall. Presumably they do not fit in with the 'Rockin- tag. Pretty much everything else is included, though I don't claim to be a true devotee.

I certainly learned a few things from the excellent booklet. one of them being that 'Cry Myself To Sleep', with Grady Martin and company, was one of several Nashville record-ings. This isn't rock n roll as most of us know and love it and I guess that it even falls into the nostalgia category. but I bought a couple of these releases and heard them a lot on radio, TV and at friends' houses and so I found listen-ing to them again quite an enjoyable exper-ience. Mind you, I soon found that my falsetto isn't quite what it used to be, resulting in a few coughing fits, and I couldn't find my old metal Kazoo to join in on 'So Long Baby'. which was a shame. Among the things that were new to my ears was 'That's The Way Love Is'. a superior piece of 1960s pop music that I really enjoyed.

There are also two instrumentals. one of them -'Torture' - being just that for me. but amid the mayhem of 'Nothin- I detected a decent rock n roll instrumental with prominent sax and guitar. As I have said, not classic rock n roll, perhaps, but still very enjoyable to those of a certain age and a classy release which makes my old 99p Tring label CD obsolete. Hats off to Larry and all concerned.
Eric Dunsdon