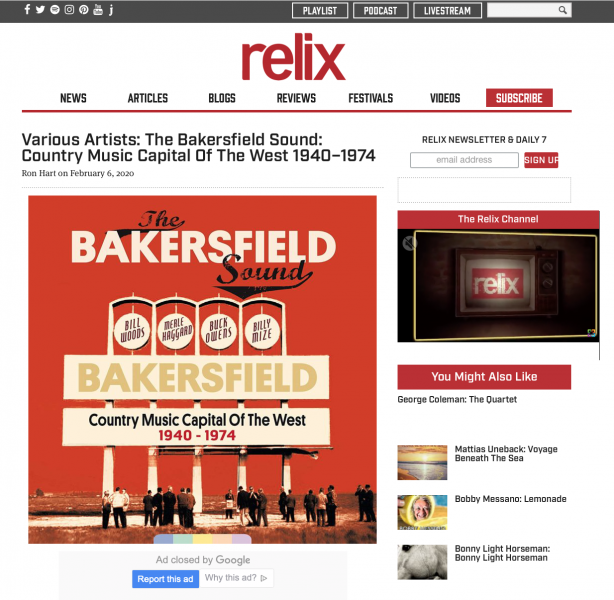 Buck Owens and Merle Haggard are undoubtedly the twin towers of the singular sound invented in Bakersfield, Calif. But as this massive new box set from the Bear Family label so intricately details, there is a Gold Rush of incredible music to be discovered beyond the gates of the Second City of country music.

The Bakersfield Sound is a veritable college course on the evolution of the region, born out of the barrooms and barn dances of the Dust Bowl era with the concept of conspiring a small combo iteration of the Western-swing big-bands who used to roll through town to perform for the laborers. It was a sound that would quickly be dubbed "Honky Tonk," and served as an edgier, more electrified alternative to the Nashville twang of the East Coast. This 10-CD set goes back to the mid-1940s via rare recordings of acts who cut their teeth performing for migrant communities in Central California like Tex Butler and Ebb Pilling, not to mention a live radio performance from Bob Wills and The Texas Playboys, who made Bakersfield a regular stop on their traveling roadshow.

It concludes in 1974, the same year that Buck made a Top-10 hit, Merle left town and legendary guitarist Don Rich was killed in a motorcycle crash. But in between those ends exists an all-you-can-eat buffet of 299 tracks that includes an early pre-fame Bill Woods vanity record, the first studio efforts from such country legends as Harlan Howard and Barbara Mandrell, and deep cuts from such national names as Ferlin Husky, Dallas Frazier, Jean Shepard, Wynn Stewart, Tommy Duncan, Al Brumley, The Gosdin Brothers, Kay Adams, Roy Nichols and Clarence White of The Byrds, not to mention a host of rough diamond regional acts waiting to be discovered. And when you tack on the rarities within, from Buck and Merle, including newly discovered Haggard work demos following his parole, The Bakersfield Sound is, quite literally, American music history in a box.