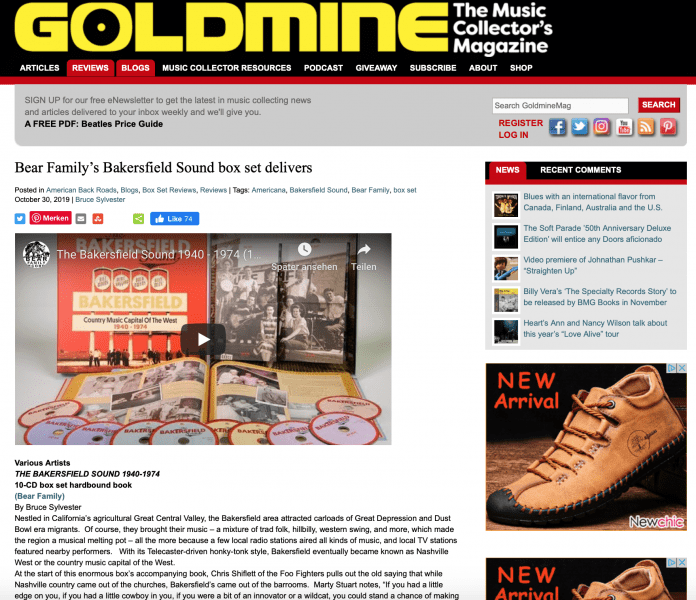 Nestled in California's agricultural Great Central Valley, the Bakersfield area attracted carloads of Great Depression and Dust Bowl era migrants. Of course, they brought their music – a mixture of trad folk, hillbilly, western swing, and more, which made the region a musical melting pot – all the more because a few local radio stations aired all kinds of music, and local TV stations featured nearby performers. With its Telecaster-driven honky-tonk style, Bakersfield eventually became known as Nashville West or the country music capital of the West.

At the start of this enormous box's accompanying book, Chris Shiflett of the Foo Fighters pulls out the old saying that while Nashville country came out of the churches, Bakersfield's came out of the barrooms. Marty Stuart notes, "If you had a little edge on you, if you had a little cowboy in you, if you were a bit of an innovator or a wildcat, you could stand a chance of making it more in California than in Nashville."

Though very different, Merle Haggard (an actual Bakersfield-area native whose family had left Oklahoma) and Texas-born Buck Owens were the Bakersfield sound's biggest successes. With nearly 300 tracks, the box also brings forth plenty of worthy local folks like Billy Mize, who was content with a regional career rather than aiming for national stardom. We hear the Maddox Brothers and Rose (wildcard forerunners of rock and roll), Red Simpson (of the trucker song genre), and 12-string telecaster hero Joe Maphis with wife Rose Lee.
Of all the small labels here, Tally (run by local entrepreneur Lew Talley) was the most significant. Songwriter Harlan Howard's first disc was on it. Jan Howard (his wife at the time) did her first demo tapes at Tally. Just as back in mid-50s Memphis, Sam Phillips at Sun Records found the sound he sought in teenaged Elvis Presley, Talley found his sound in young Merle Haggard. Last-minute copyright issues forced rare Tally tapes of Hag's to be dropped from this package after its book was printed.

Far more than any other major label, Capitol Records (based not far away in Hollywood) signed Bakersfield-area acts, assigning them to producer Ken Nelson, whose background was in classical, not country. His chart successes stemmed in part from his willingness to give free rein in the studio to artists like Hag and Buck who had clear (and good) ideas of the sound they wanted. Buck dedicates a live rendition of "Tiger by the Tail" to Nelson.

Bakersfield's music community could be close-knit. Take Bonnie Owens, who's dubbed the First Lady of the Bakersfield Sound. Born Bonnie Campbell in Oklahoma City, she married Buck Owens, bore him Alan Edgar Owens (who recorded as Buddy Alan), dated Fuzzy Owen (Talley's first cousin and Hag's eventual manager), and then married Hag, remaining his muse after their divorce. Then there's Wanda Jackson, whose parents left Oklahoma for the Bakersfield area when she was about five. They moved back to Oklahoma after a few years but spent summers in Bakersfield visiting relatives. Once they brought along her boyfriend, Leonard Sipes. He stayed in Bakersfield, changed his name to Tommy Collins, penned numerous hits (along the way enjoying a few of his own), and mentored young Hag, who honored him in "Leonard" (a song not in the box). Buck's first session as a studio guitarist for Capitol was on Collins's lightly comic 1954 country top-tenner "You Better Not Do That." Bakersfield instrumentalists often backed Wanda's sessions on Capitol.
No tracks in the box repeat Bear Family's previous two-CD THE OTHER SIDE OF BAKERSFIELD. We get live versions of a few classics like Hag's semi-autobiographical "Mama Tried" rather than the original studio versions. Fans with enough bucks and enthusiasm for this extravaganza probably already have the big studio hits anyway. It's cool to instead get rarities like the first commercial release of a Hag composition (actually a co-write), Johnny Barnett's 1963 "Second Fiddle" on (no surprise) Tally. Author Liz Anderson does her original "(All My Friends Are Gonna Be) Strangers," whose title took on a double meaning in Hag's hands when he named his band The Strangers. From 1966, there's 17-year-old Barbara Mandrell's debut solo recording. Dallas Frazier, age 14, sings one of his early compositions. We hear blind Leon Payne's 1948 western swing original of his composition "Lost Highway" (a song some people assume Hank Williams wrote). For comic commentary, there's Billy Mize's Korean War-based "Pusan" ("I saw the rice paddies doing the burp gun boogie."), which previously surfaced in Bear Family's fascinating four-CD BATTLEGROUND KOREA.

Then there's Jean Shepard and Ferlin Husky's Korean War tearjerker (and #1 1953 country hit) "A Dear John Letter" on Capitol — the first major national hit backed mostly by Bakersfield boys. Guess what. It was the song's third local release. The thorough compilation also offers prior "Dear John" duets by Bonnie Owens and Fuzzy Owen on Mar-Vel and by Bill Woods and Rita Goodwin on Kord. As we see from photos of the earlier platters' labels and from sheet music for the Shepard/Husky hit, authorship credits evolved along the way. Why? Talley recognized the song's hit potential, traded its author Hillbilly Barton a 1947 Kaiser for a share of its ownership, and then sold some of his percentage to Fuzzy.

So why does the set end with the year 1974? We're given three reasons why '74 was a turning point: It was the last full year that Hag lived in the city before moving away and recording in Nashville. Buck had his final top 10 solo hit that year, and the Buckaroos' esteemed guitarist Don Rich died in a motorcycle crash. Also, by then, Austin was becoming renegade central for country music.

Being a Bear Family venture, the accompanying 220-page hardbound book is a cornucopia of overview articles plus shorter pieces on each artist (with loads of formal and informal photos) and each track (often with a shot of the single on its original label — many of them obscure). The text can be candid. Buck's duet partner Susan Raye ("I was a Sunday school teacher and a family person.") talks about the last straw before she abandoned the professional music world. Dorothy Lange's 1935 photos of the Dust Bowl migration are accompanied by promotional postcards showing what Bakersfield became.

Over the years, the likes of The Byrds, Flying Burrito Brothers, Commander Cody, Bill Kirchen, Dwight Yoakam, the Mavericks, and Dale Watson have reflected the influence of the box's music.