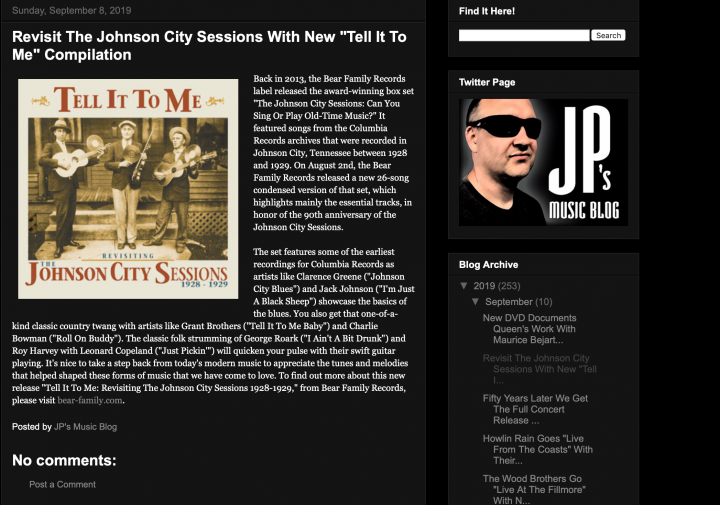 Back in 2013, the Bear Family Records label released the award-winning box set "The Johnson City Sessions: Can You Sing Or Play Old-Time Music?" It featured songs from the Columbia Records archives that were recorded in Johnson City, Tennessee between 1928 and 1929. On August 2nd, the Bear Family Records released a new 26-song condensed version of that set, which highlights mainly the essential tracks, in honor of the 90th anniversary of the Johnson City Sessions.

The set features some of the earliest recordings for Columbia Records as artists like Clarence Greene ("Johnson City Blues") and Jack Johnson ("I'm Just A Black Sheep") showcase the basics of the blues. You also get that one-of-a-kind classic country twang with artists like Grant Brothers ("Tell It To Me Baby") and Charlie Bowman ("Roll On Buddy"). The classic folk strumming of George Roark ("I Ain't A Bit Drunk") and Roy Harvey with Leonard Copeland ("Just Pickin'") will quicken your pulse with their swift guitar playing. It's nice to take a step back from today's modern music to appreciate the tunes and melodies that helped shaped these forms of music that we have come to love. To find out more about this new release "Tell It To Me: Revisiting The Johnson City Sessions 1928-1929," from Bear Family Records, please visit bear-family.com.