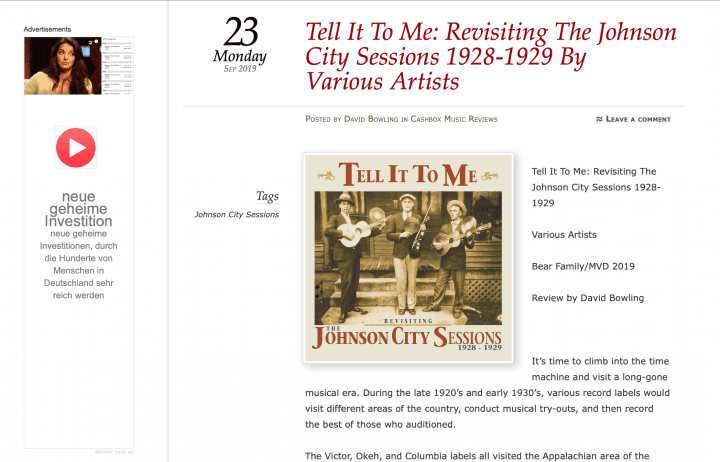 It's time to climb into the time machine and visit a long-gone musical era. During the late 1920's and early 1930's, various record labels would visit different areas of the country, conduct musical try-outs, and then record the best of those who auditioned.

The Victor, Okeh, and Columbia labels all visited the Appalachian area of the United States. The best known of these auditions was Victor's 1927 Bristol Sessions, which produced the first commercial recordings of Jimmie Rodgers and the Carter Family. Several years later Columbia recorded 100 songs by various artists. While these sessions may not have produced any great stars; they do form a vital link to the development of American music.

While the artists contained on this CD have mostly disappeared into musical history; the music they left behind forms the beginnings of American country, bluegrass, and rockabilly music, and helped sow the seeds of rock and roll.

Songs and artists such as "When The Roses Bloom For The Bootlegger" by McVay & Johnson, "Just Over The River" by Garland Brothers & Grindstead, "Green Valley Waltz" by McCartt Brothers & Patterson, "Just Pickin'" by Roy Harvey & Leonard Copeland, "Buttermilk Blues" by Ellis Williams, and "The Battleship Maine" by Richard Harold are raw, basic, and recorded during a very non-technological age. The songs include guitars, fiddles, mandolins, banjos, washboards, spoons, and just about anything else that could be used to create sounds.

The sound is nowhere near modern standards. Recorded in an empty store building; every once in a while you can hear a train whistle or sounds from a lumber company in the background.

Whether this music will appeal to you depends on your commitment to the roots of American music. If you are so inclined, Tell It To Me: Revisiting The Johnson City Sessions 1928-1929 will be a treasure trove that leads to a captivating historical journey.