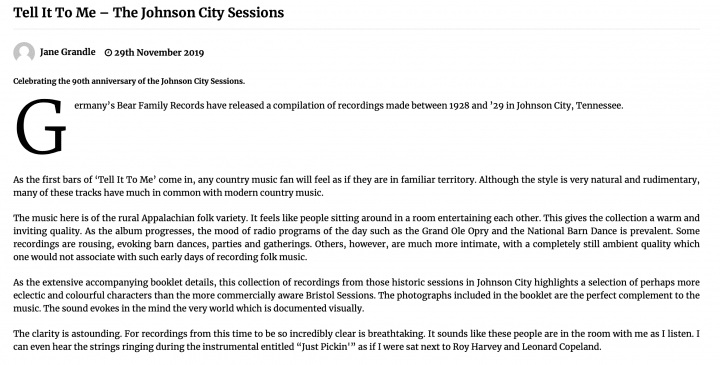 Germany’s Bear Family Records have released a compilation of recordings made between 1928 and ’29 in Johnson City, Tennessee.
As the first bars of ‘Tell It To Me’ come in, any country music fan will feel as if they are in familiar territory. Although the style is very natural and rudimentary, many of these tracks have much in common with modern country music.

The music here is of the rural Appalachian folk variety. It feels like people sitting around in a room entertaining each other. This gives the collection a warm and inviting quality. As the album progresses, the mood of radio programs of the day such as the Grand Ole Opry and the National Barn Dance is prevalent. Some recordings are rousing, evoking barn dances, parties and gatherings. Others, however, are much more intimate, with a completely still ambient quality which one would not associate with such early days of recording folk music.

As the extensive accompanying booklet details, this collection of recordings from those historic sessions in Johnson City highlights a selection of perhaps more eclectic and colourful characters than the more commercially aware Bristol Sessions. The photographs included in the booklet are the perfect complement to the music. The sound evokes in the mind the very world which is documented visually.
The clarity is astounding. For recordings from this time to be so incredibly clear is breathtaking. It sounds like these people are in the room with me as I listen. I can even hear the strings ringing during the instrumental entitled “Just Pickin'” as if I were sat next to Roy Harvey and Leonard Copeland.
Conclusion

At first glance, some of the included tracks here make it seem obvious why the Bristol Sessions are considered seminal and these are not so well known. The Carter Family and Jimmie Rodgers are perhaps more individual in hindsight and their influence can be traced clearly and strong through the generations of future artists and musicians. However, here we find examples of the music of the people, which is as fine and representative of the people of the day living in those rural areas as was the work of the Carters and Rodgers.
There is quite a shortage of female voice here. That is possibly the only thing which sticks out as unusual. Otherwise, the 26 artist names also bring to mind charmingly a bygone world. There are names and song titles which bring vibrancy and life to a time long gone. Despite this evocation, this music feels as fresh today as ever.