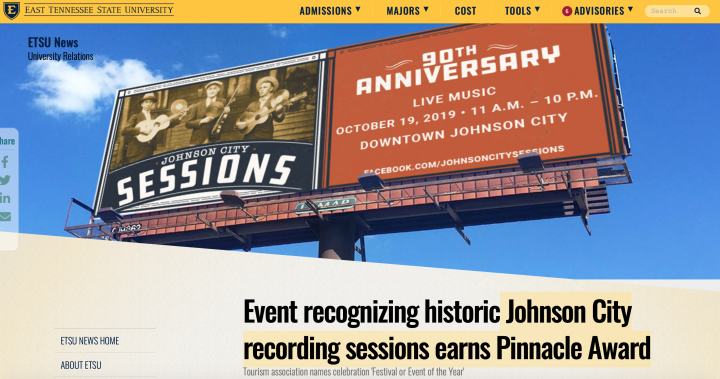 JOHNSON CITY (July 10, 2020) – “Tell It to Me: The Johnson City Sessions 90th Anniversary Celebration,” a two-day event held in Johnson City, on October 18-19, 2019, was named “Festival or Event of the Year” during the recent Northeast Tennessee Tourism Association’s Pinnacle Awards.
decorative image for Reaching a Pinnacle
Reaching a Pinnacle

"Tell It to Me: The Johnson City Sessions 90th Anniversary Celebration," held in October 2019, received the Pinnacle Award for "Festival or Event of the Year," which is the most competitive category in this annual competition sponsored by the Northeast Tennessee Tourism Association.

“Tell It to Me” celebrated the influential Johnson City Sessions, which were commercial recording sessions of Appalachian regional music conducted in downtown Johnson City in October 1928 and October 1929. Those recordings, released by Columbia Records at the dawn of the Great Depression, have inspired several generations of musicians in such genres as country, bluegrass, folk, rock and Americana. Until recently, though, there has been little public awareness that the recordings originated in Johnson City. The 2019 event was intended to generate broader awareness about the significance of those recordings locally and regionally as well as nationally and internationally.
The Pinnacle Awards program pays tribute to Northeast Tennessee’s peak performers in the tourism industry. According to NETTA’s website, nominations are reviewed by a panel of unbiased judges, and exemplary projects and individuals are selected as Pinnacle Award winners. NETTA Director Alicia Phelps said that the decision to award “Tell It to Me” the top Festival/Event honor “was a unanimous decision in what is always our most competitive category.”

The organizing of “Tell It to Me” was led by East Tennessee State University’s Center for Appalachian Studies and Services in partnership with the City of Johnson City government, which contributed strategic planning assistance; the Johnson City Convention and Visitors Bureau/Johnson City Chamber of Commerce, which provided vital fundraising; and Radio Bristol and WETS-FM, which participated in the planning and promotion of the event.
“This successful partnership between university-affiliated people, local government and business officials, and media ensured the success of ‘Tell It to Me’ in realizing its goals of fostering public awareness of the Johnson City Sessions’ historical significance while drawing people to downtown Johnson City to immerse themselves in that history,” said Dr. Ted Olson, professor of Appalachian Studies at ETSU and chair of the organizing committee for the event.

The weekend included a kick-off concert at the Down Home by the Tim O’Brien Band which included the release of the album “Tell It to Me: Revisiting the Johnson City Sessions, 1928-1929.” That Independent Music Award-winning album featuring key recordings from the sessions was produced by Olson and released by Germany’s Bear Family Records.
The anniversary celebration, which attracted hundreds of music fans to downtown Johnson City despite heavy rainfall as Tropical Storm Nestor moved into the area, also featured musical acts interpreting the Johnson City Sessions recordings, a children’s stage with youth performers, performance and instrument-building demonstrations, a record fair, and arts and crafts vendors.
The award-winning event in October 2019 was the third occasion held in Johnson City to celebrate those 1928-1929 recording sessions.
The first, held in Johnson City in October 2013, marked the inaugural release on CD of all 100 historical Johnson City Sessions recordings from 1928-1929 collected in a box set that was titled “Can You Sing or Play Old-Time Music?: The Johnson City Sessions, 1928-1929” and released by Bear Family Records.