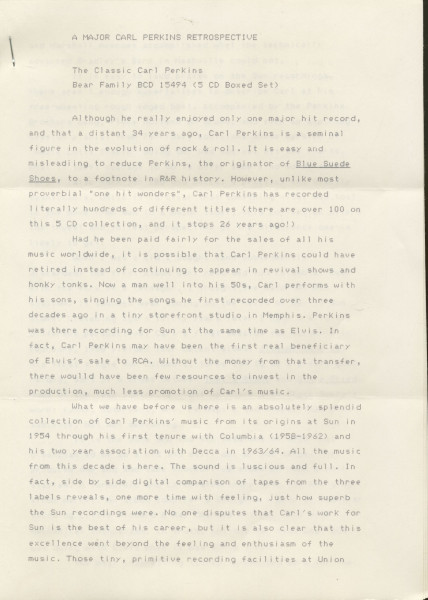 A MAJOR CARL PERKINS RETROSPECTIVE by Hank Davis
The Classic Carl Perkins
Bear Family BCD 15494 (5 CD Boxed Set)
Although he really enjoyed only one major hit record, and that a distant 34 years ago, Carl Perkins is a seminal figure in the evolution of rock & roll. It is easy and misleading to reduce Perkins, the originator of Blue Suede Shoes, to a footnote in R&R history. However, unlike most proverbial "one hit wonders", Carl Perkins has recorded literally hundreds of different titles (there are over 100 on this 5 CD collection, and it stops 26 years ago!)

Had he been paid fairly for the sales of all his music worldwide, it is possible that Carl Perkins could have retired instead of continuing to appear in revival shows and honk-tonks. Now a man well into his 50s, Carl performs with his sons, singing the songs he first recorded over three decades ago in a tiny storefront studio in Memphis. Perkins was there recording for Sun at the same time as Elvis. Jr fact, Carl Perkins may have been the first real beneficiary of Elvis's sale to RCA. Without the money from that transfer, there woulld have been few resources to invest in the production, much less promotion of Carl's music.

What we have before us here is an absolutely splendid collection of Carl Perkins' music from its origins at Sun in 1954 through his first tenure with Columbia (1958-1962) and his two year association with mecca in 1963/64. All the music from this decade is here. The sound is luscious and full. In fact, side by side digital comparison of tapes from the three labels reveals, one more time with feeling, just how superb the Sun recordings were. No one disputes that Carl's work for Sun is the best of his career, but it is also clear that this excellence went beyond the feeling and enthusiasm of the music.

Those tiny, primitive recording facilities at Union and Marshall Avenues accomplished what the technically advanced Bradley's Barn in Nashville could not.

It is easy to laud praise on the Sun recordings. There aren't enough superlatives to describe Carl at his free-wheeling rough edged best, accompanied by the Perkins Brothers band, Fluke Holland on drums, and even an aspiring session pianist from Ferriday, Louisiana whose version of "Whole Lotta Shakin' Going On" had not yet hit the charts. What it takes courage to do is offer some kind words about Carl's later work for CBS and Decca, a practice not exactly fashionable. While it is clear that something vital was lost in the move from Sun to a major label, this collection offers the truest and fullest perspective of the difference one is likely to get.

When I was a kid I bought (and subsequently discarded) the first album Carl recorded for Columbia. Even with the ears of a teenager. I thought the material was shallow. It sounded weak coming on the heels of Carl's Sun sides. Listening again thirty years later I have a slightly different perspective. Carl's first session for Columbia in February, 1958 yielded four decent sides. Jive After Five, his first single for Columbia, turns out to be a pretty good record, sort of a cross between That's Right and Dixie Fried. Some of the teen poetry is right up there with Chuck Berry's work: funny, observant, wry. Perhaps a tad hipper than his audience, but not demeaning.

It is the June 3rd and 4th sessions of 1958 that disenchanted me as a kid and still do, by and large. They produced one and two-take knockoff versions of rock & roll staples. A formulaic and calculated entry into the emerging album market. An album compiler's delight: a bevy of familiar sounding Little Richard & Ray Charles titles, done with mechanical enthusiasm. In truth, not too far from what RCA was doing with Elvis when it was album time.

The most interesting titles, presented here for the first time are the originally unissued material. This is often what makes Bear Family productions the collector's delight they are. Thirty years later we can second guess the head office and see what Carl was really up to in the studio. Carl finally hits his stride at the fourth Columbia session on November 6, 1958. He does a cover of the Louisiana swamp blues, This Life I Live; re-records the Sun title Y-O-U; and then produces the altogether exceptional Honey Cause I Love You.

Although it wasn't released until the early '60s on the flipside of a syrupy ballad, Honey Cause I Love You is an absolute gem. Sure, we could have lived without the chorus (who needed them on rockers?), but even so there is some undeniable magic on this track. The first eight bars are a glimpse of heaven: the heavy acoustic guitar, the electric guitar playing a decending figure, closely stalked by the piano. Everything sets the stage for Carl's vocal entrance, and it's worth the wait. This is one of Carl's more potent, sexy, yet restrained performances of the period.

Perhaps the biggest surprise and strongest ingredient is the drumming. It's hard to believe the session log that this is the same W.S. Holland who later made a living playing brushes behind Johnny Cash. What you have here, pure and simple, is a jazz drummer playing with a country rock band. Talk about hybrid vigor! During the verse, the drum accent, normally, providing backbeat on 2 and 4. Everything seems normal until the instrumental break, when rhythmically all hell breaks loose. It's anybody's guess where the accents are going, which creates tension and cross rhythms uncommon in rockabillx music. On top of this, the guitar break is a gem in the Scotty Moore tradition. Not to be outdone, the slap bass, generally buried in the echoex mix, manages to break free during the stops after the drum rolls. Two small notes was all it took to assert his presence at the gig.

This is a truly extraordinary record. It should have risen to the surface, stretching both Perkins and his musical genre. Instead it was held back from release, then sank like a stone, on the flipside of an overproduced ballad. One can lament the indignities and innanities of the music business but, instead, consider the brightside: this record was recorded by Carl Perkins not long after his move to Columbia. He still had it. If the magic didn't happen at Columbia as often as it had at Sun, at least it still happened.

Carl turned out some other noteworthy sides for CBS, all of which appear here. From March, 1960 is the underrated L-O-V-E-V-I-L-L-E. The next session, over a year later (a bad sign) produced The Unhappy Girls, another standout track. Next March at his penultimate Columbia session, Carl recorded the engaging Hollywood City, penned by Otis Blackwell. One more session and two more singles followed, but by this time Columbia had given up on Carl. In summary, while it is clear that Columbia was not going to turn Carl Perkins loose to record badass southern anthems like Dixie Fried, it is also doubtful that Sun would have continued to indulge him in this direction.

Over a year later, Carl Perkins had his first Nashville session for Decca. With the exception of some sides recorded in England in 1964 (including the superb and unissed Say When), Carl's Decca material from this period has never been highly regarded. Although by no means historical recordings, the output from two Nashville sessions is worth a closer listen. If one gets past some overproduction at the first date, I• Wouldn't Have You and Help Me Find My Baby are both enjoyable countryish tracks. The trick is not to compare them with Bopping the Blues. Carl's English session for Decca, backed by the Nashville Teens, provided some surprisingly tasty results, although a pointless remake of Blue Suede Shoes should be ignored. The final Decca session features some black-oriented band work (played by Nashville's finest honkies), but Carl's vocals here sound strained and, rare for him, a bit forced.

For their part, Bear Family has done a superb job of putting this package together. The visuals are a delight and Colin Escott's notes are informative and enjoyable. Along with Colin and Martin Hawkins, I was involved in the production of the first Carl Perkins retrospective for Charly Records (Sunbox 101) back in the early 180s. Given the additional time and technology available, this one clearly eclipses our maiden effort. I can only wish that Bear Family will get around to issuing Carl's later work for Columbia as well. In the meantime we have this compilation to savor. It is a package worthy of Carl Perkins' music - and that's saying a lot.
HANK DAVIS