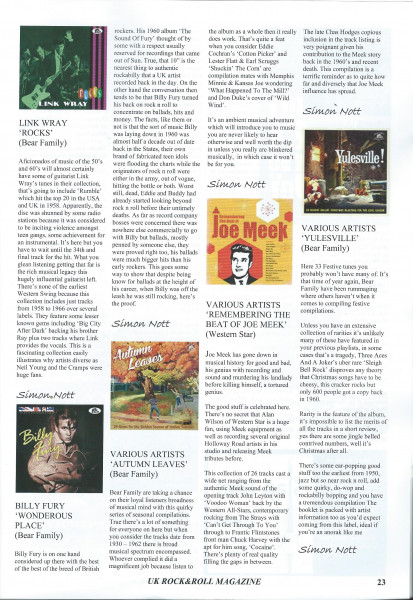 BILLY FURY `WONDEROUS PLACE' (Bear Family)
Billy Fury is on one hand considered up there with the best of the best of the breed of British rockers. His 1960 album 'The Sound Of Fury' thought of by some with a respect usually reserved for recordings that came out of Sun. True, that 10" is the nearest thing to authentic rockabilly that a UK artist recorded back in the day. On the other hand the conversation then tends to be that Billy Fury turned his back on rock n roll to concentrate on ballads, hits and money. The facts, like them or not is that the sort of music Billy was laying down in 1960 was almost half a decade out of date back in the States, their own brand of fabricated teen idols were flooding the charts while the originators of rock n roll were either in the army, out of vogue, hitting the bottle or both. Worst still, dead, Eddie and Buddy had already started looking beyond rock n roll before their untimely deaths. As far as record company bosses were concerned there was nowhere else commercially to go with Billy but ballads, mostly penned by someone else, they were proved right too, his ballads were much bigger hits than his early rockers. This goes some way to show that despite being know for ballads at the height of his career, when Billy was off the leash he was still rocking, here's the proof.
Simon Nott