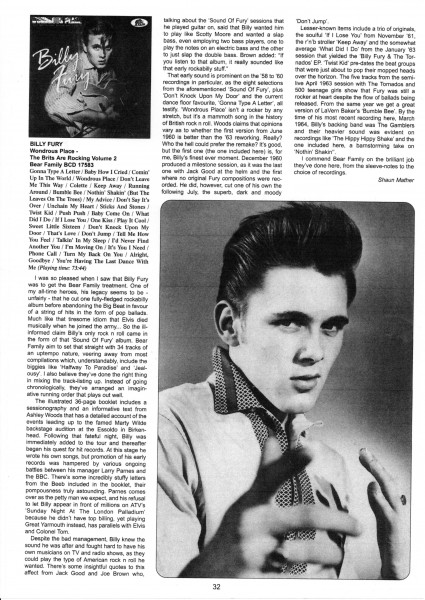 I was so pleased when I saw that Billy Fury was to get the Bear Family treatment. One of my all-time heroes, his legacy seems to be -unfairly - that he cut one fully-fledged rockabilly album before abandoning the Big Beat in favour of a string of hits in the form of pop ballads. Much like that tiresome idiom that Elvis died musically when he joined the army... So the ill-informed claim Billy's only rock n roll came in the form of that 'Sound Of Fury' album. Bear Family aim to set that straight with 34 tracks of an uptempo nature, veering away from most compilations which, understandably, include the biggies like 'Halfway To Paradise' and 'Jeal-ousy'. I also believe they've done the right thing in mixing the track-listing up. Instead of going chronologically, they've arranged an imagin-ative running order that plays out well. The illustrated 36-page booklet includes a sessionography and an informative text from Ashley Woods that has a detailed account of the events leading up to the famed Marty Wilde backstage audition at the Essoldo in Birken-head. Following that fateful night, Billy was immediately added to the tour and thereafter began his quest for hit records.

At this stage he wrote his own songs, but promotion of his early records was hampered by various ongoing battles between his manager Larry Parnes and the BBC. There's some incredibly stuffy letters from the Beeb included in the booklet, their pompousness truly astounding. Parnes comes over as the petty man we expect, and his refusal to let Billy appear in front of millions on ATV's 'Sunday Night At The London Palladium' because he didn't have top billing, yet playing Great Yarmouth instead, has parallels with Elvis and Colonel Tom. Despite the bad management, Billy knew the sound he was after and fought hard to have his own musicians on TV and radio shows, as they could play the type of American rock n roll he wanted. There's some insightful quotes to this affect from Jack Good and Joe Brown who, talking about the 'Sound Of Fury' sessions that he played guitar on, said that Billy wanted him to play like Scotty Moore and wanted a slap bass, even employing two bass players, one to play the notes on an electric bass and the other to just slap the double bass.

Brown added: "If you listen to that album, it really sounded like that early rockabilly stuff." That early sound is prominent on the '58 to '60 recordings in particular, as the eight selections from the aforementioned 'Sound Of Fury', plus 'Don't Knock Upon My Door' and the current dance floor favourite, 'Gonna Type A Letter', all testify. 'Wondrous Place' isn't a rocker by any stretch, but it's a mammoth song in the history of British rock n roll. Woods claims that opinions vary as to whether the first version from June 1960 is better than the '63 reworking. Really? Who the hell could prefer the remake? It's good, but the first one (the one included here) is, for me, Billy's finest ever moment. December 1960 produced a milestone session, as it was the last one with Jack Good at the helm and the first where no original Fury compositions were rec-orded.

He did, however, cut one of his own the following July, the superb, dark and moody 'Don't Jump'. Lesser-known items include a trio of originals, the soulful 'If I Lose You' from November '61, the r'n'b stroller 'Keep Away' and the somewhat average 'What Did I Do' from the January '63 session that yielded the 'Billy Fury & The Tor-nados' EP. 'Twist Kid' pre-dates the beat groups that were just about to pop their mopped heads over the horizon. The five tracks from the semi-live April 1963 session with The Tornados and 500 teenage girls show that Fury was still a rocker at heart despite the flow of ballads being released. From the same year we get a great version of LaVern Baker's 'Bumble Bee'. By the time of his most recent recording here, March 1964, Billy's backing band was The Gamblers and their heavier sound was evident on recordings like 'The Hippy Hippy Shake' and the one included here, a barnstorming take on 'Nothin' Shakin". I commend Bear Family on the brilliant job they've done here, from the sleeve-notes to the choice of recordings.
Shaun Mather