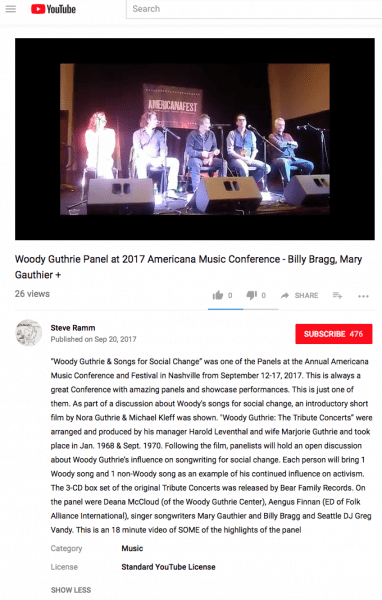 “Woody Guthrie & Songs for Social Change” was one of the Panels at the Annual Americana Music Conference and Festival in Nashville from September 12-17, 2017. This is always a great Conference with amazing panels and showcase performances. This is just one of them. As part of a discussion about Woody's songs for social change, an introductory short film by Nora Guthrie & Michael Kleff was shown. "Woody Guthrie: The Tribute Concerts” were arranged and produced by his manager Harold Leventhal and wife Marjorie Guthrie and took place in Jan. 1968 & Sept. 1970.

Following the film, panelists will hold an open discussion about Woody Guthrie’s influence on songwriting for social change. Each person will bring 1 Woody song and 1 non-Woody song as an example of his continued influence on activism. The 3-CD box set of the original Tribute Concerts was released by Bear Family Records. On the panel were Deana McCloud (of the Woody Guthrie Center), Aengus Finnan (ED of Folk Alliance International), singer songwriters Mary Gauthier and Billy Bragg and Seattle DJ Greg Vandy. This is an 18 minute video of SOME of the highlights of the panel