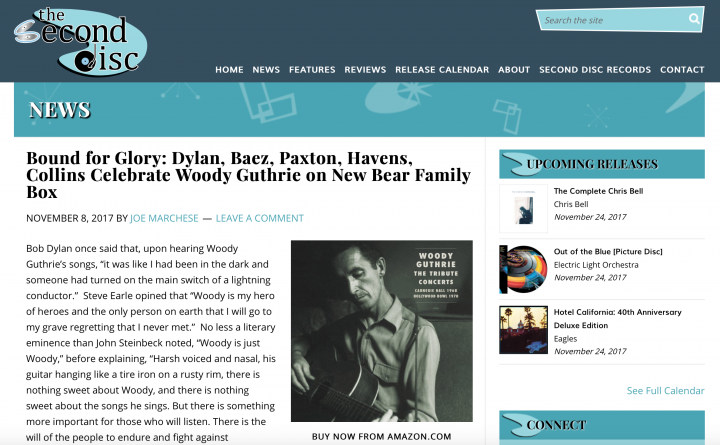 Bound for Glory: Dylan, Baez, Paxton, Havens, Collins Celebrate Woody Guthrie on New Bear Family Box NOVEMBER 8, 2017 BY JOE MARCHESE LEAVE A COMMENT BUY NOW FROM AMAZON.COM Bob Dylan once said that, upon hearing Woody Guthrie’s songs, “it was like I had been in the dark and someone had turned on the main switch of a lightning conductor.” Steve Earle opined that “Woody is my hero of heroes and the only person on earth that I will go to my grave regretting that I never met.” No less a literary eminence than John Steinbeck noted, “Woody is just Woody,” before explaining, “Harsh voiced and nasal, his guitar hanging like a tire iron on a rusty rim, there is nothing sweet about Woody, and there is nothing sweet about the songs he sings. But there is something more important for those who will listen.

There is the will of the people to endure and fight against oppression. I think we call this the American spirit.” Though the troubadour born Woodrow Wilson Guthrie died in 1967 at the age of 55, his legacy of folk music lives on. In the best folk tradition, his songs have been adapted and passed on from generation to generation on live performance stages, and Guthrie tribute concerts have become, in a sense, de rigeur. Thanks to the herculean efforts of Bear Family Records, however, two of the earliest and most electrifying of those concerts can be enjoyed anew. Woody Guthrie: The Tribute Concerts – Carnegie Hall 1968/Hollywood Bowl 1970 brings together in a lavish 3-CD box set two concert performances: one held at New York’s Carnegie Hall a mere three months after the songwriter’s passing, and one from two years later at the Hollywood Bowl. A “Who’s Who” was shared between the shows, including Bob Dylan and The Band, Pete Seeger, Arlo Guthrie, Tom Paxton, Joan Baez, Country Joe McDonald, Richie Havens, Judy Collins, and Ramblin’ Jack Elliott. (The latter two would appear in the Woody Guthrie at 100 celebrations in 2012, as well.)

Recording rights to the concerts were shared by Columbia Records and Warner Bros. Records, who each released one part in 1972. Warner Bros. then repackaged the shows as a 2-LP set in 1976 and again on CD in 1989. This remarkable set presents the shows in complete form and sequence, with 20 previously unreleased tracks, along with a host of bonus material and in true Bear Family tradition, copious text to place the music in vivid historical perspective. In this case, the slipcased box contains two hardcover coffee table-style books – one at 160 pages, and one at 88. The Carnegie Hall concerts of January 20, 1968 (there was a matinee performance, as well) are presented on the first disc of this set. Actors Robert Ryan and Will Geer shared narration duties, colorfully delivering Millard Lampell’s homespun recollections of Guthrie. “He was against poverty and hunger, bigotry and bargain basement justice,” recites Ryan, “con artists…and crooked politicians. He was against Ku Kluxers, tight-fisted bankers, landlords, deputy sheriffs and FBI men…against the superior, the smug, the comfortable sons of bitches of the world that ride the backs of the poor and pile up a profit out of war. He was for the outsider and the outcast, the radical and the rebel.” Guthrie’s own words are also heard in the narration.

The virtues for which he stood – and figures whom he stood against – informed his topical and political writing. Though some principles of the so-called Left have shifted over the years, much of this American radical patriot’s oeuvre is still startlingly relevant. There’s a charming, familial and low-key feel to the concerts largely absent from such concerts today, as well as a pronounced theatrical component. In fact, the second book contained in this box set reprints Millard Lampell’s script (The Woody Guthrie Concert Book) so others could perform A Tribute to Woody Guthrie and keep his music sung. The selections are varied from Guthrie’s large catalogue, touching on his personal compositions (“Curly Headed Baby,” performed by Pete Seeger), his indelible character studies (“Pretty Boy Floyd,” sung by Tom Paxton), reflections of a life on the road (“So Long, It’s Been Good to Know Yuh,” sung in purely lovely style by Judy Collins) and songs for the unsung (“Ramblin’ Round,” in which Odetta gives stirring voice to a refugee, and the plucked-from-life “Deportee,” again beautifully sung by Collins, her crystalline soprano contrasting with the sad, visceral lyrics of the migrant workers’ tragedy).

Richie Havens was the sole artist at Carnegie Hall to sing a composition inspired by, rather than written by Guthrie, with his own, impassioned “Blues for Woody,” and his “Vigilante Man” was one of the most intense performances of the show. Though the Carnegie Hall concert was primarily acoustic, there was one exception: Bob Dylan. The onetime heir apparent to Guthrie had radically changed his style by early 1968, but his affection for Guthrie never diminished. Unlike the other performers, he brought along his fiery, electric band – soon to be The Band – for a lively three-song set comprising a rollicking and twangy “Grand Coulee Dam,” an affectionate “Dear Mrs. Roosevelt,” and a happily ragged “I Ain’t Got No Home” with barrelhouse piano. As with most all-star celebrations, duets prove to be among the highlights, and this show was no exception as Seeger and Havens joined for “Jackhammer John,” and Seeger and Collins with the jovial “Union Maid.” The whole company, of course, emerged for the joyous finale of “This Land is Your Land” (what else?).