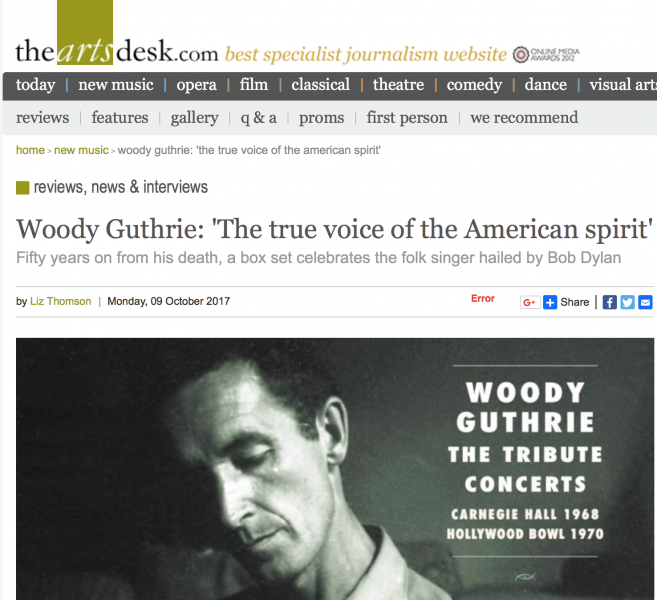 Some will rob you with a six-gun
And some with a fountain pen.…

I was around 12 years old when I first heard those lines, from “Pretty Boy Floyd”, written by Woody Guthrie and sung by Joan Baez on a live album recorded on her 1962 tour of America’s black campuses. I couldn’t fathom what they meant – how could you be robbed with a fountain pen?

I was in the early stages of my obsession with what I would come to understand as “the New York folk revival”, an obsession that has, in ways large and small, shaped my life though the revival was by then already long over. I’m not sure when I figured out what the words meant but, as the years have passed, they seem ever more apposite, summing up much of what has happened to the world over the last decade to the 99 Percent who lost out to banksters and corporate interests

Charles Arthur “Pretty Boy” Floyd was an Oklahoman Robin Hood figure. He was not as benevolent in real life as in Guthrie’s song, but that does nothing to devalue the lines themselves, even though fountains pens and ledgers long ago gave way to computers and spreadsheets.

It’s now half a century since Woody Guthrie died, on 3 October 1967, and most notable among the projects marking the anniversary is the lovingly curated boxed set from Bear Family Records of Woody Guthrie: The Tribute Concerts – Carnegie Hall 1968, Hollywood Bowl 1970. Comprising an all-star cast including Baez, Bob Dylan, Pete Seeger, Odetta, Judy Collins and Arlo Guthrie, plus Peter Fonda, Will Geer and Rob Ryan who read from Guthrie’s distinctive prose, the set comprises three CDs and two lavish hardback books.

Guthrie was just 55 and had been ill for years, his body ravaged by Huntingdon’s Disease, which took his mother and threatened his children. Famously, a young student named Robert Zimmerman read his autobiography, Bound for Glory, while a freshman at the University of Minnesota and hitchhiked (at least in some stories) to New York intent on meeting him. Guthrie had long been hospitalised but, in early 1961, Bob Dylan did get to meet the man he would describe as his first and last idol, joining old Guthrie friends such as Cisco Houston, Ramblin' Jack Elliott and a Clancy brother or two on one of Woody’s weekend’s at the home of Robert and Sidsel Gleason in East Orange, New Jersey, as Robert Shelton recounts in No Direction Home: The Life and Music of Bob Dylan. After the visit, Dylan wrote “Song to Woody”, which he would record for his debut album.

The folk revival would shortly burst into the mainstream, in Britain as in America. Inasmuch as Guthrie was known in Britain it was through such songs as “Grand Coulee Dam” which Lonnie Donegan took into the charts in 1958. A few years later, Donovan fetched up on TV, his guitar bearing the slogan “The machine kills fascists” – which was copied from Guthrie. And somehow, because it must be in our collective DNA, we all know “This Land is Your Land”, which began life as a response to the schmaltz of Irving Berlin’s “God Bless America”, which was scarcely off the airwaves in 1940. In recent years, Billy Bragg and others have done much to bring Guthrie’s music to a wider public and when Woody was inducted into the Hall of Fame at this year’s BBC Radio 2 Folk Awards it was Bragg who accepted the honour on behalf of the Guthrie family.

Born in Okemah, Oklahoma to middle-class parents, Guthrie’s early life was marred by tragedy even before the dust storms and the depression of the 1930s laid waste to so many lives. Guthrie – an autodidact, a self-taught musician – would chronicle it all. In poems, in songs and in "Woody Sez", his column for the Daily Worker, he wrote about the Dust Bowl refugees and migrant farm workers, the poor and dispossessed, the “little people” taught to believe they were “just born to lose”. The issues he wrote and sang about are as pressing now as they were then. Just 18 months ago, Will Kaufman, currently Professor of American Literature and Culture at the University of Central Lancashire (who contributes an essay to one of the books), unearthed in the Guthrie archives a song about a fraudulent and racist landlord named Fred Trump… Plus ça change.

Dylan, on that 1961 visit to Guthrie, told the assembled group that “You can listen to Woody Guthrie songs and actually learn how to live.” Writing 40 years later in his memoir Chronicles, he called Guthrie “the true voice of the American spirit”.

Guthrie’s legacy is enormous, his own recorded archive vast. It includes, of course, the very first “concept album”, Dust Bowl Ballads (1940), the songs written as he headed west with thousands of Okies looking for work in California (“I Ain’t Got No Home In This World Anymore”, “Tom Joad”, “Do Re Mi”). He wrote songs for the migrant farm workers (“Deportee”), and most remarkably perhaps he was commissioned by the President Roosevelt’s Department of the Interior to write songs that told the story of the construction of the dams on the Columbia River whose hyrdro-electric power would bring cheap electricity to the Pacific Northwest. These 26 songs include “Roll On, Columbia”, “Pastures of Plenty” – and “Grand Coulee Dam”.