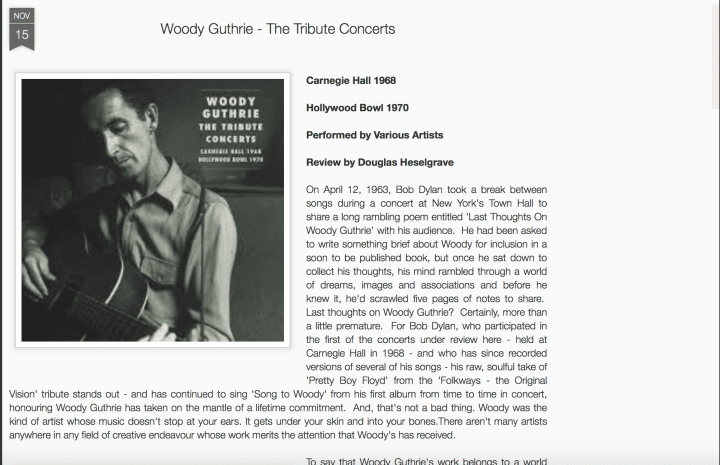 On April 12, 1963, Bob Dylan took a break between songs during a concert at New York's Town Hall to share a long rambling poem entitled 'Last Thoughts On Woody Guthrie' with his audience.  He had been asked to write something brief about Woody for inclusion in a soon to be published book, but once he sat down to collect his thoughts, his mind rambled through a world of dreams, images and associations and before he knew it, he'd scrawled five pages of notes to share.  Last thoughts on Woody Guthrie?  Certainly, more than a little premature.  For Bob Dylan, who participated in the first of the concerts under review here - held at Carnegie Hall in 1968 - and who has since recorded versions of several of his songs - his raw, soulful take of 'Pretty Boy Floyd' from the 'Folkways - the Original Vision' tribute stands out - and has continued to sing 'Song to Woody' from his first album from time to time in concert, honouring Woody Guthrie has taken on the mantle of a lifetime commitment.  And, that's not a bad thing. Woody was the kind of artist whose music doesn't stop at your ears. It gets under your skin and into your bones.There aren't many artists anywhere in any field of creative endeavour whose work merits the attention that Woody's has received. 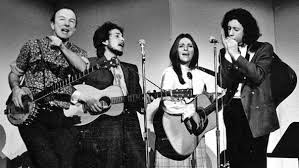 To say that Woody Guthrie's work belongs to a world that has gone by is to overstate the obvious.  It's almost impossible to imagine anyone coming around today who could work as independently and move as freely and express as much as he did in such an unfettered and unaffected way.  Would Live Nation or Ticketmaster have their hooks in Woody if he were alive today?  Hard to imagine.  Hard to say.  But, thankfully Guthrie was around before there was much of a music industry, and whatever financial or material hardships this may have engendered that wouldn't have been his lot had he been performing a few decades later, Guthrie's unvarnished music and persona have remained intact.

Thankfully, there are lots of recordings of Woody Guthrie available, but there aren't many people alive today who ever had the opportunity to hear him perform his music live in a concert or union hall setting. Like a lot of people of my generation, I grew up singing 'This Land is your Land' (the Canadian version) at school assemblies and camp before I had any idea of who Woody Guthrie was. I first heard his songs performed by  Pete Seeger and the Weavers, and first realized who the songwriter was through Bob Dylan.  But, the songs would have endured even without Pete and Bob championing them.  Songs like Woody's are more than capable capable of surviving and standing on their own.  I've read that  Mozart and Bach were pretty amazing keyboard players and that it was something else to hear them perform their own music.  Maybe people who were alive at the time couldn't have imagined that anyone could have embodied the music like Wolfgang Amadeus or Johann Sebastian did, but I think I've done pretty well hearing Glenn Gould and Angela Hewitt play their compositions, hundreds of years after they were first written.  I think Woody Guthrie's music will continue to survive in the same way.

The new Woody Guthrie 'The Tribute Concerts' box sets collects the first two important commemorative concerts given in the years directly following his passing. They were groundbreaking, important events that celebrated Guthrie's life and work in a way that was fresh and immediately meaningful. The sense of connection, of an unbroken circle is impossible to miss. This is because the participants were comprised of Guthrie's contemporaries like Pete Seeger and Will Geer, as well as the younger artists such as Bob Dylan, Joan Baez and Richie Havens, who were in a very real sense handed his torch with the understanding that they would continue to embody his message and call on the spirit communicated by his music.

In the years directly following these tributes, there were a trickle of commemorative albums like the excellent British album, 'Woody Lives' and 'Folkways: A Vision Shared' that featured songs by Leadbelly and Woody Guthrie interpreted by newer artists such as Fishbone and U2 as well as a few stalwarts like Arlo Guthrie and Bob Dylan. Still, things were fairly quiet on the Woody front until the late nineties when 'Mermaid Avenue' came out and got things rolling again.  It was based on a novel concept that involved Nora Guthrie opening up Woody's lyrical archives to Billy Bragg and Wilco who set music to notes and poems that had been jotted down in his journals.  The results were electrifying and certainly did a lot to revive Woody's art in a new era.  Since then, a number of similar projects have been realized with musicians from a variety of genres interpreting Woody's lyrics in idioms ranging from bluegrass (Del and Woody) to klezmer. ( Wonder Wheel by the Klezmatics) Listening through all of these tributes, there's not a dud in the bunch.  In fact, I count a few of the songs like 'My Revolutionary Mind' interpreted by Rage against the Machine's Tom Morello (from 2011's 'Note of Hope') as amongst the best lyrics that Woody ever penned.

Yet, even though each of the multitude of Woody Guthrie tributes is worth listening to for the light they shed on Woody's artistry, for me, nothing touches these first tribute concerts from 1968 and 1970 for their ramshackle spirit and the sheer joy of sharing music they communicate.  These are the tributes I grew up with, and with my original lps battered to the point of unplayability, the new box set couldn't have come along at a better time. The question remains of course that, if you're like me and know these performances inside out and you dutifully bought them on CD when they first came out, is there any reason to spend your hard earned money to buy the box set? The answer is an unqualified, resounding 'yes.'  It's no secret that in today's digital world that if you're trying to sell a physical product, it's got to be something pretty special and of lasting value.  The good news is that 'Woody Guthrie - The Tribute Concerts' is as beautifully designed, packaged and well-executed a box set as I've ever seen.  Inside its handsome slipcase are enclosed two sturdy hardback books.  The first, entitled 'The Tribute Concerts' features a three cd set of beautifully remastered performances from 'Carnegie Hall' in 1968 and 'Hollywood Bowl' in 1970, all prefaced by some really great essays about Woody Guthrie, and beautifully illustrated with rare photographs from the concerts and rehearsals. And, even though I've got a shelf full of books and records of Woody Guthrie memorabilia, there's lots of stuff even hardcore collectors and fans may not have seen or have images of.  Reproductions of old 78 album covers, a shot of the dust jacket of the original edition of Bound for Glory and an essay by Will Kaufman called 'What We've Learned Since the Tribute Concerts are amongst the many highlights to enjoy.  An archival essay that covers the history of Woody tributes right up to 'New Multitudes' and 'Note of Hope' was informative and gives appropriate context to this set.  The second volume in the box, 'The Woody Guthrie Concert Book' is an attractive hardbound book that features all of the songs performed at the tributes with lyrics and easy to follow chords supplied so that anyone who wants to try singing and playing the songs themselves (isn't that the whole point of Woody's music?) can do so with little fuss.  The original concert script (from 1968) written by Millard Lampell and performed by a variety of artists and actors is woven through the volume to provide movement and continuity.