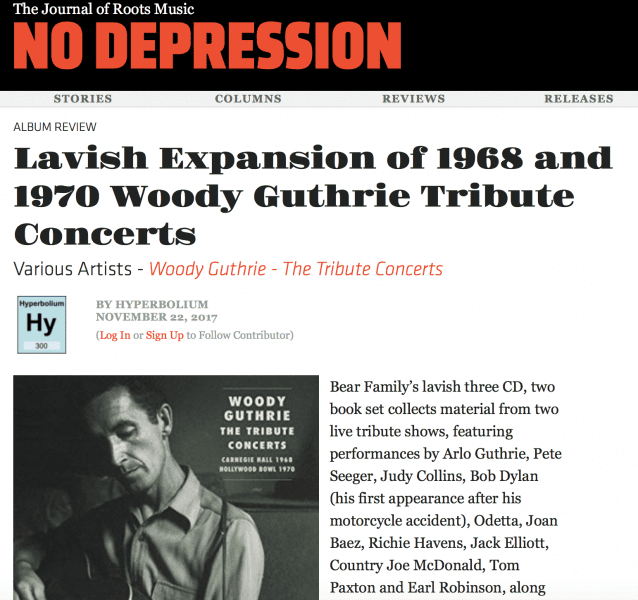 Bear Family’s lavish three CD, two book set collects material from two live tribute shows, featuring performances by Arlo Guthrie, Pete Seeger, Judy Collins, Bob Dylan (his first appearance after his motorcycle accident), Odetta, Joan Baez, Richie Havens, Jack Elliott, Country Joe McDonald, Tom Paxton and Earl Robinson, along with narration from actors Robert Ryan, Will Geer and Peter Fonda.  The first tribute included an afternoon/evening pair of concerts staged at Carnegie Hall in 1968, the second tribute was staged at the Hollywood Bowl in 1970. Material from both tributes was released in edited, collated and resequenced form on a pair of 1972 LPs, Part 1 on Columbia and Part 2 on Warner Brothers, and eventually reissued on CD and MP3.

In honor of the fiftieth anniversary of Guthrie’s passing, Bear Family has gathered all of the extant concert materials - including the entire Hollywood Bowl concert - to recreate the original, scripted concerts by adding back narration and musical performances that were elided from the LPs, and adding in interview clips that shed light on Guthrie and the productions. The three CDs are fitted into the back cover of a 160-page hardbound book that overflows with photos, essays, press clippings, remembrances, artist and production staff biographies, ephemera, notes on production, recording and filming, a discography, a bibliography and a filmography. The book is housed in a heavy-duty slipcase alongside a reproduction of the 1972 volume, The TRO Woody Guthrie Concert Book, which itself includes photos, sheet music, and song notes from Guthrie and Millard Lampell. All together, the package weighs in at over five pounds!

Lampell’s script for the shows threads together Guthrie’s songs and autobiographical writing, Lampell’s script tells Guthrie’s story through the people he met, the stories he sang and the musicians he influenced. Highlights of the New York shows include Will Geer’s knowing tone in describing his longtime comrade,  the then-recently minted starlight of Arlo Guthrie shining on his father’s “Oklahoma Hills,” the sound of Pete Seeger’s banjo and his physical embodiment of the folk movement’s hard-fought roots, and Tom Paxton’s mournful “Pastures of Plenty.” Dylan’s band-based triptych stands apart from the more traditional folk arrangements of his castmates, and shows the directions he’d been developing during his eighteen month hiatus.

For all the camaraderie and good feelings of the Carnegie shows, they weren’t without controversy, as Phil Ochs’ snub led to the deeply bitter feelings recounted in his interview. Ochs’ was particularly critical of Judy Collins and Richie Havens, the latter of whom had only then recently released his debut and performed at Woodstock. But Ochs’ recriminations were misplaced, as both artists commune with Guthrie’s legacy; Collins’ embrace of “Plane Wreck At Los Gatos (Deportee)” is tear inducing, and Havens’ slow, rhythmic performance of “Vigilante Man” is hypnotic. The show closed with the cast singing Guthrie’s alternate national anthem, “This Land is Your Land,” sending the audience out to share Guthrie’s music with the world.

The Los Angeles show largely repeated the script from New York, with Peter Fonda replacing Robert Ryan in the co-narrator chair, and Arlo Guthrie, Pete Seeger, Odetta, Jack Elliott and Richie Havens newly joined by Joan Baez, Country Joe McDonald, Earl Robinson and a house band that included Ry Cooder. Dylan’s semi-electric set felt like an outlier among the acoustic arrangements of 1968, but by 1970, the house band is heard throughout much of the Hollywood Bowl program. Stretching the songs further from their acoustic origins emphasizes their their continued relevance as artistic and social capital. The band-backed songs also provide contrast to acoustic numbers such as Baez and Seeger’s audience sing-a-long “So Long, It's Been Good To Know Yuh.”

Baez sings both “Hobo's Lullaby” with empathy and tenderness, and the band’s support on Odetta’s “Ramblin’ Round” inspires a looser performance than she gave in New York. Country Joe McDonald, who began his solo career the year before with Thinking of Woody Guthrie, sings a rousing version of “Pretty Boy Floyd” and provides original music for the previously unrecorded Guthrie lyric “Woman at Home.” Woody Guthrie’s performance style echoed most strongly in Ramblin’ Jack Elliott’s “1913 Massacre,” and placed back-to-back with Arlo Guthrie’s blues-rock take on “Do Re Mi,” highlights how amendable the songs are to reinvention.

The Los Angeles recording is more detailed than the tapes made from the house system in New York, and though it’s musically rich, with Guthrie’s passing two years further in the past, it doesn’t feel as urgent as the earlier shows. Disc three is filled out with interview clips that shed light on Guthrie and the tribute concerts. As Arlo Guthrie recounts in interview, and Lampell echoes in his opening essay, Guthrie had developed a legacy in the ‘30s and ‘40s, but it was the folk revival that really cemented his popular artistic immortality. The tribute concerts consolidated the discovery of the revival, acknowledging the original context in which Guthrie wrote, and renewing his songs’ significance by highlighting their ongoing relevance to then-current issues. The shows employed the folk tradition as stagecraft.