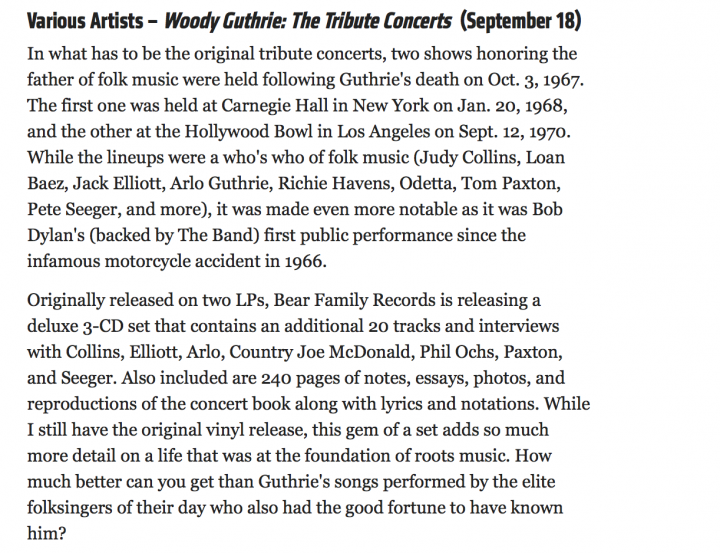 In what has to be the original tribute concerts, two shows honoring the father of folk music were held following Guthrie's death on Oct. 3, 1967. The first one was held at Carnegie Hall in New York on Jan. 20, 1968, and the other at the Hollywood Bowl in Los Angeles on Sept. 12, 1970. While the lineups were a who's who of folk music (Judy Collins, Loan Baez, Jack Elliott, Arlo Guthrie, Richie Havens, Odetta, Tom Paxton, Pete Seeger, and more), it was made even more notable as it was Bob Dylan's (backed by The Band) first public performance since the infamous motorcycle accident in 1966.

Originally released on two LPs, Bear Family Records is releasing a deluxe 3-CD set that contains an additional 20 tracks and interviews with Collins, Elliott, Arlo, Country Joe McDonald, Phil Ochs, Paxton, and Seeger. Also included are 240 pages of notes, essays, photos, and reproductions of the concert book along with lyrics and notations. While I still have the original vinyl release, this gem of a set adds so much more detail on a life that was at the foundation of roots music. How much better can you get than Guthrie's songs performed by the elite folksingers of their day who also had the good fortune to have known him?