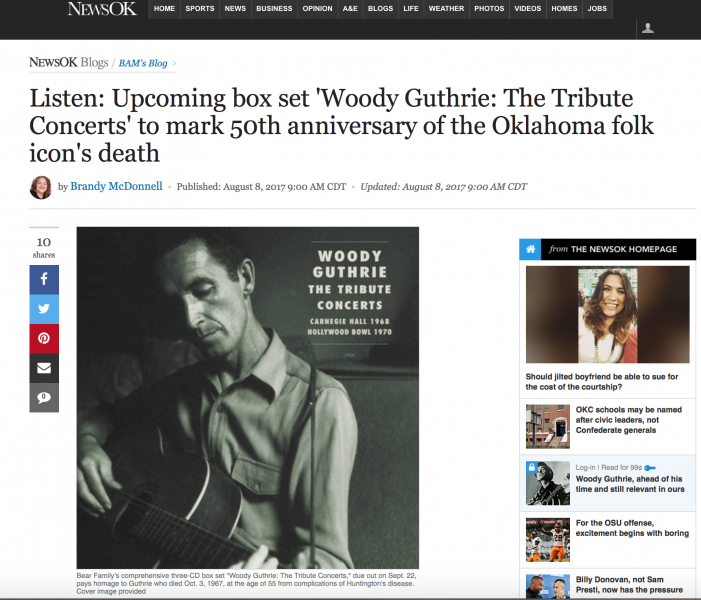 With the 50th anniversary of Oklahoma folk icon Woody Guthrie's death coming up this fall, a new box set is collecting the performances from two star-studded tribute concerts that took place in the troubadour's honor.

Bear Family’s comprehensive three-CD box set "Woody Guthrie: The Tribute Concerts," due out on Sept. 22, pays homage to Guthrie, who died Oct. 3, 1967, at the age of 55 from complications of Huntington's disease.

The forthcoming box set includes one 33-track disc of the 1968 Carnegie Hall tribute, while discs 2 and 3 contain 45 tracks from the 1970 Hollywood Bowl event, according to a news release.

The three-plus hours of concert material showcases most of Guthrie’s finest songs: “So Long, It’s Been Good To Know You,” “Goin’ Down the Road,” “Oklahoma Hills,” “This Train Is Bound for Glory,” “Deportee,” and, of course, “This Land Is Your Land,” which closed both concerts.

In addition to commemorating 50 years since Guthrie passed away, the new release marks the 50th anniversary of the Committee to Combat Huntington's Disease, renamed the Huntington’s Disease Society of America. The organization was founded by Guthrie’s wife, Marjorie Guthrie, in September 1967.