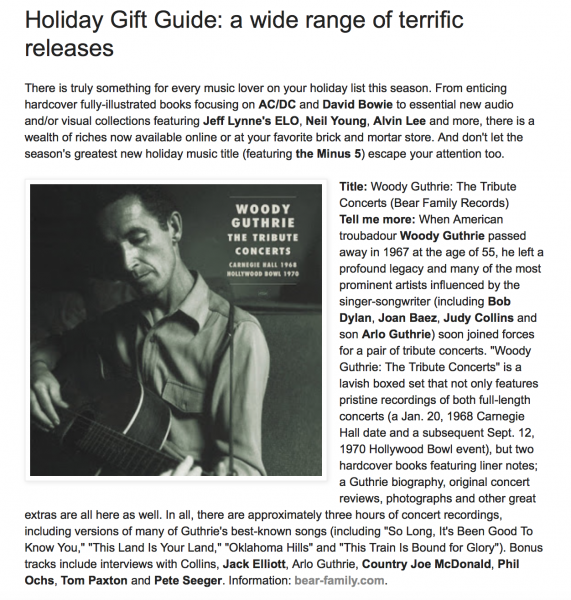 Holiday Gift Guide: a wide range of terrific releases
There is truly something for every music lover on your holiday list this season. From enticing hardcover fully-illustrated books focusing on AC/DC and David Bowie to essential new audio and/or visual collections featuring Jeff Lynne's ELO, Neil Young, Alvin Lee and more, there is a wealth of riches now available online or at your favorite brick and mortar store. And don't let the season's greatest new holiday music title (featuring the Minus 5) escape your attention too.

Title: Woody Guthrie: The Tribute Concerts (Bear Family Records)
Tell me more: When American troubadour Woody Guthrie passed away in 1967 at the age of 55, he left a profound legacy and many of the most prominent artists influenced by the singer-songwriter (including Bob Dylan, Joan Baez, Judy Collins and son Arlo Guthrie) soon joined forces for a pair of tribute concerts. "Woody Guthrie: The Tribute Concerts" is a lavish boxed set that not only features pristine recordings of both full-length concerts (a Jan. 20, 1968 Carnegie Hall date and a subsequent Sept. 12, 1970 Hollywood Bowl event), but two hardcover books featuring liner notes; a Guthrie biography, original concert reviews, photographs and other great extras are all here as well. In all, there are approximately three hours of concert recordings, including versions of many of Guthrie's best-known songs (including "So Long, It's Been Good To Know You," "This Land Is Your Land," "Oklahoma Hills" and "This Train Is Bound for Glory"). Bonus tracks include interviews with Collins, Jack Elliott, Arlo Guthrie, Country Joe McDonald, Phil Ochs, Tom Paxton and Pete Seeger