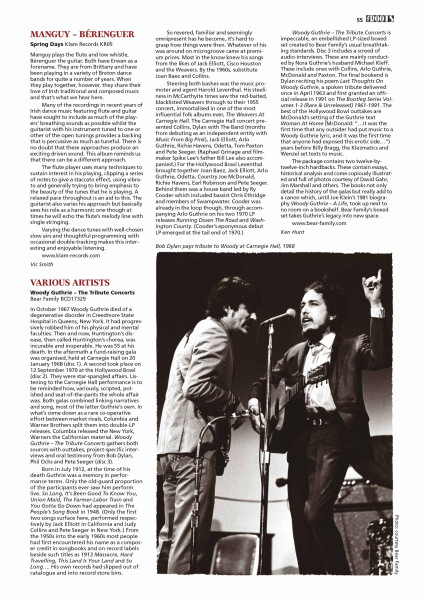 In October 1967 Woody Guthrie died of a degenerative disorder in Creedmore State Hospital in Queens, New York. It had progres- sively robbed him of his physical and mental faculties. Then and now, Huntington’s dis- ease, then called Huntington’s chorea, was incurable and inoperable. He was 55 at his death. In the aftermath a fund-raising gala was organised, held at Carnegie Hall on 20 January 1968 (disc 1). A second took place on 12 September 1970 at the Hollywood Bowl (disc 2). They were star-spangled affairs. Lis- tening to the Carnegie Hall performance is to be reminded how, variously, scripted, pol- ished and seat-of-the-pants the whole affair was. Both galas combined linking narratives and song, most of the latter Guthrie’s own. In what’s come down as a rare co-operative effort between market rivals, Columbia and Warner Brothers split them into double-LP releases. Columbia released the New York, Warners the Californian material. Woody Guthrie – The Tribute Concerts gathers both sources with outtakes, project-specific inter- views and oral testimony from Bob Dylan, Phil Ochs and Pete Seeger (disc 3).

Born in July 1912, at the time of his death Guthrie was a memory in perfor- mance terms. Only the old-guard proportion of the participants ever saw him perform live. So Long, It’s Been Good To Know You, Union Maid, The Farmer-Labor Train and You Gotta Go Down had appeared in The People’s Song Book in 1948. (Only the first two songs surface here, performed respec- tively by Jack Elliott in California and Judy Collins and Pete Seeger in New York.) From the 1950s into the early 1960s most people had first encountered his name as a compos- er credit in songbooks and on record labels beside such titles as 1913 Massacre, Hard Travelling, This Land Is Your Land and So Long.... His own records had slipped out of catalogue and into record store bins.

So revered, familiar and seemingly omnipresent has he become, it’s hard to grasp how things were then. Whatever of his was around on microgroove came at premi- um prices. Most in the know knew his songs from the likes of Jack Elliott, Cisco Houston and the Weavers. By the 1960s, substitute Joan Baez and Collins.

Steering both bashes was the music pro- moter and agent Harold Leventhal. His steeli- ness in McCarthyite times saw the red-baited, blacklisted Weavers through to their 1955 concert, immortalised in one of the most influential folk albums ever, The Weavers At Carnegie Hall. The Carnegie Hall concert pre- sented Collins, Dylan with The Band (months from debuting as an independent entity with Music From Big Pink), Jack Elliott, Arlo Guthrie, Richie Havens, Odetta, Tom Paxton and Pete Seeger. (Raphael Grinage and film- maker Spike Lee’s father Bill Lee also accom- panied.) For the Hollywood Bowl Leventhal brought together Joan Baez, Jack Elliott, Arlo Guthrie, Odetta, Country Joe McDonald, Richie Havens, Earl Robinson and Pete Seeger. Behind them was a house band led by Ry Cooder which included bassist Chris Ethridge and members of Swampwater. Cooder was already in the loop though, through accom- panying Arlo Guthrie on his two 1970 LP releases Running Down The Road and Wash- ington County. (Cooder’s eponymous debut LP emerged at the tail end of 1970.)

Woody Guthrie – The Tribute Concerts is impeccable, an embellished LP-sized boxed set created to Bear Family’s usual breathtak- ing standards. Disc 3 includes a screed of audio-interviews. These are mainly conduct- ed by Nora Guthrie’s husband Michael Kleff. These include ones with Collins, Arlo Guthrie, McDonald and Paxton. The final bookend is Dylan reciting his poem Last Thoughts On Woody Guthrie, a spoken tribute delivered once in April 1963 and first granted an offi- cial release in 1991 on The Bootleg Series Vol- umes 1-3 (Rare & Unreleased) 1961-1991. The best of the Hollywood Bowl outtakes are McDonald’s setting of the Guthrie text Woman At Home (McDonald: “...it was the first time that any outsider had put music to a Woody Guthrie lyric, and it was the first time that anyone had exposed this erotic side...”) years before Billy Bragg, the Klezmatics and Wenzel set texts to music.

The package contains two twelve-by- twelve-inch hardbacks. These contain essays, historical analysis and come copiously illustrat- ed and full of photos courtesy of David Gahr, Jim Marshall and others. The books not only detail the history of the galas but really add to a canon which, until Joe Klein’s 1981 biogra- phy Woody Guthrie – A Life, took up next to no room on a bookshelf. Bear Family’s boxed set takes Guthrie’s legacy into new space.