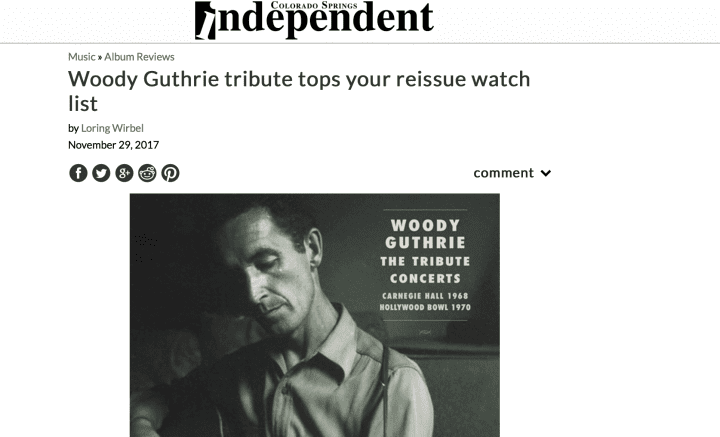 The pinnacle of holiday gifts for music fans was once the elaborate CD box set, but that format has all but given way to reissued vinyl.

The books give us unique pictorial glimpses of concert production, and of Woody’s life from the 1920s until his death from Lou Gehrig’s disease in 1967.

While the remastering of the live recordings is exceptional, the real accomplishments here are twofold: acquiring rights to original releases that were split between Columbia and Warner Brothers, and adding a third disc of interviews with participants and family, including Arlo Guthrie. It may be tempting to skip to Bob Dylan’s or Joan Baez’s contributions first, but it’s the lesser lights like Odetta and Tom Paxton that make this definitive box such a tribute to Woody.

Moving back into the realm of vinyl, The Beatles’ 1967 milestone Sgt. Pepper may be among the highest-profile releases this season, but the real mother lode comes with an album that was released that same year. Newly reissued in its original mono mix earlier this month, Pearls Before Swine’s One Nation Underground(Drag City) is a classic example of Tom Rapp’s psychedelia-meets-polyrhythms, but let’s hope the rest of the Pearls back catalog follows.

Meanwhile for ‘70s fans, few reissues can beat Brian Eno’s essential four pop recordings from that era: Here Come the Warm Jets, Taking Tiger Mountain by Strategy, Another Green World and Before and After Science (Astralwerks). The albums were released as 45 rpm, half-speed mastered, double-LPs last month, but for those on a budget, expect single-LP versions to follow in December.

Connoisseurs of hard-core 1980s punk will love the early recordings of Hüsker Dü, compiled as four LPs (or three CDs for you retro types) in the collection Savage Young Dü (Numero Group), which features 69 tracks, most of them live and many of them unreleased to date.