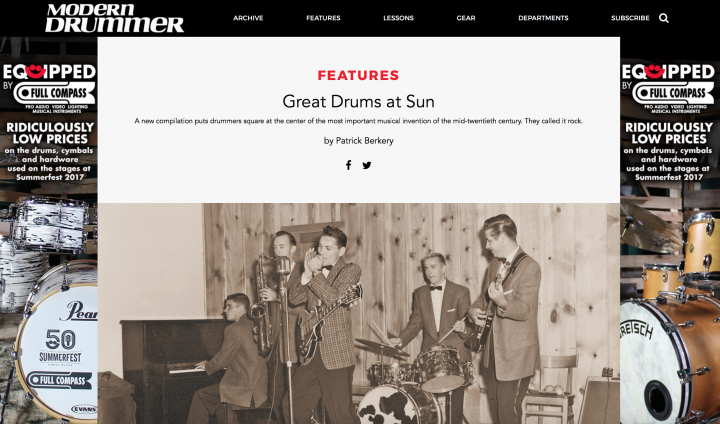 This is not an assemblage of quaint 4/4 and gentle ting-ting-a-ting shuffling from a bygone era. Great Drums lives up to its name, showcasing no-joke chops that sound as vibrant today as they did sixty years ago, from Van Eaton (dig the flipped beats and two measure-long single-stroke rolls he plays on Lewis’s “Lovin’ Up a Storm”) and Holland (like the alternating Latin and rock feels he applies to Carl Mann’s “Foolish One”) along with others in the studio’s drumming crew, including Johnny Bernero (who played on many Elvis sides at Sun), Bobby Crafford, Joe Riesenberg, Billy Pat Ellis, and Houston Stokes.

It didn’t matter that the blues had only recently birthed this baby called rock ’n’ roll, that Van Eaton was barely out of high school, that Holland had precious little experience behind a kit, or that Bernero’s tastes leaned more toward jazz. The Sun drummers blazed a path for future generations of rockers. Taking their cues from Dixieland, swing, and early R&B timekeepers, they brought the rock and, most important (as Keith Richards and the late Chuck Berry would tell you), the roll to these simple and usually very sparse songs. Charlie Watts, Ringo Starr, John Bonham, and many other top names would take it from there over the course of the next decade, but their lineage runs directly back to Sun Studio.

“We were at ground zero, trying to create all this stuff,” the seventy-nine-year-old Van Eaton says with a noticeable measure of pride. “We were just trying to figure out how to do it ourselves.”

Holland, who at eighty-two is still gigging regularly, laughs, then politely interrupts Modern Drummer in the midst of a compliment about his playing on the aforementioned “Foolish One,” a peppy song whose Latin feel is referred to as a tresillo rhythm in the Great Drums liner notes. “Here I was in 1958 playing a rhythm that was developed in Cuba,” he says. “I am so glad to find out all these years later what I was doing, because I had no idea.”

You can forgive Holland for being tresillo-ignorant. He wasn’t exactly a student of rhythm or drumming coming up. In fact, he wasn’t a drummer at all when Carl Perkins invited him to play drums at his audition for Phillips at Sun in 1954. Holland was a friend of the Perkins family who worked as an air-conditioning repairman, and he would regularly go see the burgeoning rockabilly legend at local clubs. When the spirit moved him one time, he hopped on stage to tap along on the hollow body of Perkins’ younger brother Clayton’s upright bass. That impromptu act launched Holland’s drumming career, the highlights of which include rollicking and chugging along with Perkins in his glory days, followed by a forty-year stint doing the same with Johnny Cash.