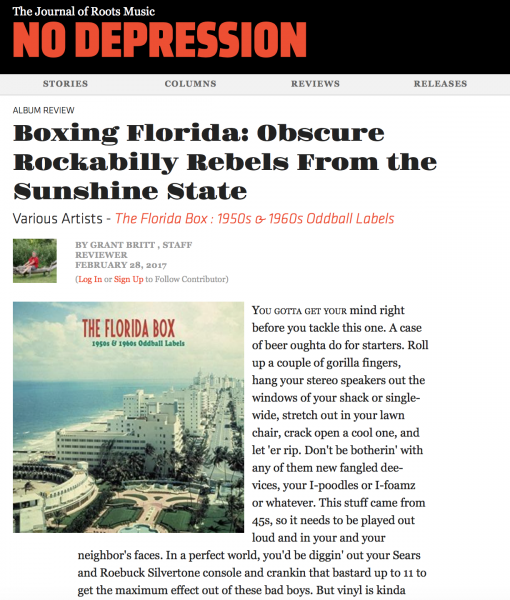 You gotta get your mind right before you tackle this one. A case of beer oughta do for starters. Roll up a couple of gorilla fingers, hang your stereo speakers out the windows of your shack or single-wide, stretch out in your lawn chair, crack open a cool one, and let 'er rip. Don't be botherin' with any of them new fangled dee-vices, your I-poodles or I-foamz or whatever. This stuff came from 45s, so it needs to be played out loud and in your and your neighbor's faces. In a perfect world, you'd be diggin' out your Sears and Roebuck Silvertone console and crankin that bastard up to 11 to get the maximum effect out of these bad boys. But vinyl is kinda scare these days, and even if you had the originals you'd need a handtruck and a strong back to cart this 250 track record collection around, so you gotta make do with CDs.

Put together by a seriously twisted record collector, The Florida Boxscoops up some of the best and worst examples of rockabilly and rock from the '50s and '60s on obscure Florida labels. There's already been a Michigan and a Texas Box set, and this one is a proud (well, sometimes) representation of artists toiling in obscurity.

There are a few notable exceptions. Hasil Atkins is the most noteworthy and the scariest of the bunch. Adkins was a madman who had no boundaries.

His idea of romance involved decapitation, as expressed in “No More Hot Dogs,” inspired after a double date at a local drive-in. Cackling maniacally through the first verse, Atkins gets hold of himself long enough to tell his unfortunate date “I want your head to hang on my wall tonight/Now honey, don't you be afraid/'Cause I'm gonna cut your head off/And you can't eat no more hot dogs.” When he wasn't having bloodthirsty fantasies about women, he was offering up dances to illustrate his intentions towards them. "The Hunch,” included here, doesn't leave much to the imagination, Atkins punctuating his plea to be your hunchin' man with carnal grunts and moans. Atkins' vocals sounded like Jerry Lee Lewis, and his guitar work was primitive but inspired; loud, rattly, and dangerous, the way rockabilly's spozed to be.

Steve Alaimo was known as a blue-eyed soul singer, hosting Dick Clark's TV show Where the Action Is. He had a hit in '63 with “Everyday I Have To Cry Some,” but his take on little Richard's “The Girl Can't Help It” is much looser, like Elvis in his rockabilly days, a wiggly rattler with a country accent.

“Rock and roll has just about brought about the disintegration of our civilization,” Elder Charles Beck says in his “Rock and Roll Sermon.” Beck gets as worked up as the rockers he's excoriating on part two of his sermon, with a takeoff on Bill Haley and the Comets' “Rock Around The Clock.” But the Elder's clock ticks have more dire consequences than Haley's. “Five o'clock rock,” he shouts hoarsely, “Roll out of the paddy wagon/roll into the courthouse/ roll out of the courthouse/roll into the penitentiary/roll into the electric chair.”

You may not have heard of Jimmy Tennant, aka Jimmy Velvet. But Elvis and Jerry Lee knew who he was, and there are pictures to prove it, with Velvet's arms draped around a bare-chested Lewis and several posing with Presley who was a lifetime friend. Velvet sounds like a bit like Jerry Lee on the raucous rockabilly clanger “Giggle Wiggle.”

Poor ole Betty Brannon couldn't hit a note if it was tied up and lying on her feet. She's got no sense of time or rhythm either. She could be charged with attempted murder for her assault on Hank Williams' “Honky Tonkin.'” It's excruciatingly bad, which of course makes it wonderful to us twisted connoisseurs of wretchedness.

These box sets are helmed by self-described record nerd Micha Gottschalk, and include a hard cover, 136 page book that not only provides brutally honest criticism of the cuts but also lists the value of the 45s should you stumble over them at a yard sale or in a thrift store and want to steal off with your treasures without alerting the purveyors of the value of your booty.

But make sure you make your preparations before you sit down with this one. It's an all day sucka that'll lick you if you're not properly hydrated. Lube up, kick back, and get down.