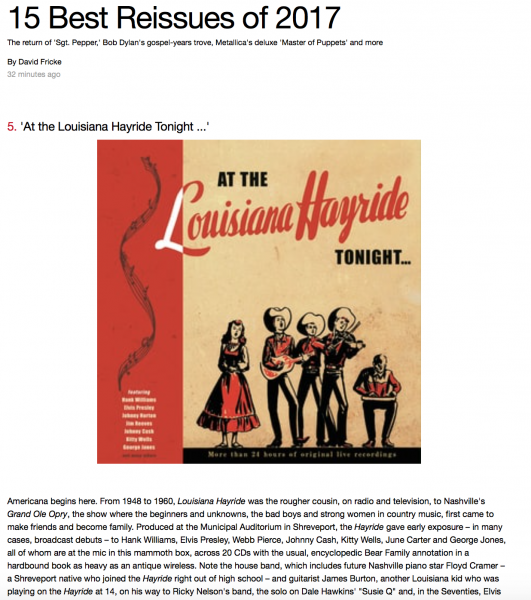 Americana begins here. From 1948 to 1960, Louisiana Hayride was the rougher cousin, on radio and television, to Nashville's Grand Ole Opry, the show where the beginners and unknowns, the bad boys and strong women in country music, first came to make friends and become family. Produced at the Municipal Auditorium in Shreveport, the Hayride gave early exposure – in many cases, broadcast debuts – to Hank Williams, Elvis Presley, Webb Pierce, Johnny Cash, Kitty Wells, June Carter and George Jones, all of whom are at the mic in this mammoth box, across 20 CDs with the usual, encyclopedic Bear Family annotation in a hardbound book as heavy as an antique wireless. Note the house band, which includes future Nashville piano star Floyd Cramer – a Shreveport native who joined the Hayride right out of high school – and guitarist James Burton, another Louisiana kid who was playing on the Hayride at 14, on his way to Ricky Nelson's band, the solo on Dale Hawkins' "Susie Q" and, in the Seventies, Elvis Presley's TCB Band.