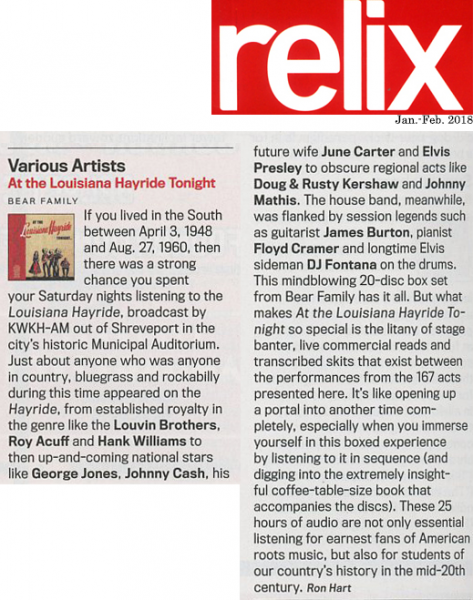 relix
Various Artists At the Louisiana Hayride Tonight BEAR FAMILY If you lived In the South between April 3, 1948 and Aug. 27, 1960, then there was a strong chance you spent your Saturday nights listening to the Louisiana Hayride, broadcast by KWKH-AM out of Shreveport in the city's historic Municipal Auditorium.

Just about anyone who was anyone in country, bluegrass and rockabilly during this time appeared on the Hayride, from established royalty in the genre like the Louvin Brothers, Roy Acuff and Hank Williams to then up-and-coming national stars like George Jones, Johnny Cash, his future wife June Carter and Elvis Presley to obscure regional acts like Doug & Rusty Kershaw and Johnny Mathis. The house band, meanwhile, was flanked by session legends such as guitarist James Burton, pianist Floyd Cramer and longtime Elvis sideman DJ Fontana on the drums.

This mindblowing 20-disc box set from Bear Family has it all. But what makes At the Louisiana Hayride To-night so special is the litany of stage banter, live commercial reads and transcribed skits that exist between the performances from the 167 acts presented here. It's like opening up a portal Into another time com-pletely, especially when you immerse yourself in this boxed experience by listening to it in sequence (and digging into the extremely insight-ful coffee-table-size book that accompanies the discs). These 25 hours of audio are not only essential listening for earnest fans of American roots music, but also for students of our country's history in the mid-20th century. Ron Hart