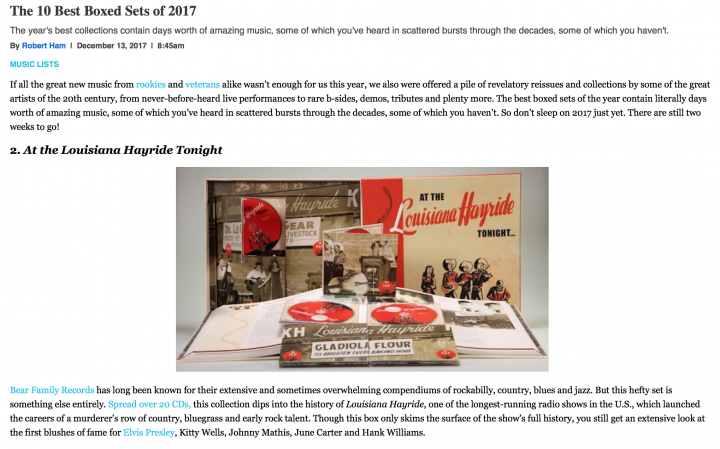 If all the great new music from rookies and veterans alike wasn’t enough for us this year, we also were offered a pile of revelatory reissues and collections by some of the great artists of the 20th century, from never-before-heard live performances to rare b-sides, demos, tributes and plenty more. The best boxed sets of the year contain literally days worth of amazing music, some of which you’ve heard in scattered bursts through the decades, some of which you haven’t. So don’t sleep on 2017 just yet. There are still two weeks to go!

2. At the Louisiana Hayride Tonight
Bear Family Records has long been known for their extensive and sometimes overwhelming compendiums of rockabilly, country, blues and jazz. But this hefty set is something else entirely. Spread over 20 CDs, this collection dips into the history of Louisiana Hayride, one of the longest-running radio shows in the U.S., which launched the careers of a murderer’s row of country, bluegrass and early rock talent. Though this box only skims the surface of the show’s full history, you still get an extensive look at the first blushes of fame for Elvis Presley, Kitty Wells, Johnny Mathis, June Carter and Hank Williams.