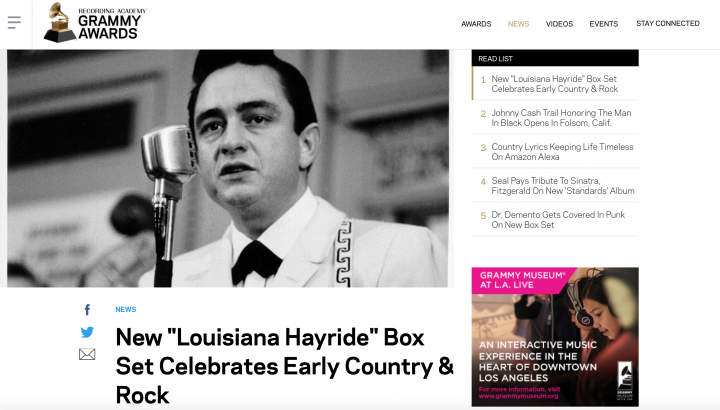 Bear Family Records offers a deep dive into the show's archives. Highlights include an unreleased recording of Williams performing "I'm A Long Gone Daddy," the full 1956 set containing the famous moment where Hayride emcee Horace Logan announced, "Elvis has left the building," a young Cash endorsing Southern Maid Donuts as the "best in the world," and rare live performances by Bill Carlisle, George Jones and more. h "The company got access to hundreds of hours of live recordings from the program, wanted to put a box set together and wanted to know if I would work on it," said the project's co-producer, Martin Hawkins. "It took me about two years to plow through all of the music. I sent a message saying that if the company wanted to do this thing properly, it's probably going to take about 20 CDs. They came back to me and said 'If that's what it takes, then that's what we will do.' Even with the 20 discs, we just scratched the surface of everything that is available." At The Louisiana Hayride Tonight also includes a 224-page hardcover book full of rare photos. The compilation will be released on Nov. 17 a is available for pre-order via Bear Family's website.