Press - The Platters - Rock - no depression 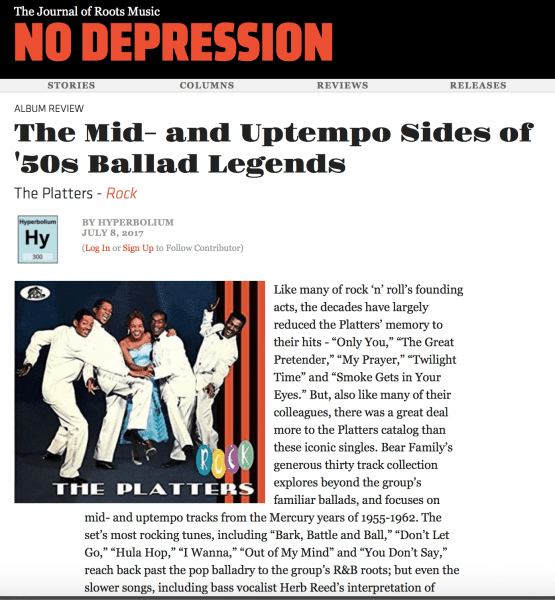 Press - The Platters - Rock - no depression

Like many of rock ‘n’ roll’s founding acts, the decades have largely reduced the Platters’ memory to their hits - “Only You,” “The Great Pretender,” “My Prayer,” “Twilight Time” and “Smoke Gets in Your Eyes.” But, also like many of their colleagues, there was a great deal more to the Platters catalog than these iconic singles. Bear Family’s generous thirty track collection explores beyond the group’s familiar ballads, and focuses on mid- and uptempo tracks from the Mercury years of 1955-1962. The set’s most rocking tunes, including “Bark, Battle and Ball,” “Don’t Let Go,” “Hula Hop,” “I Wanna,” “Out of My Mind” and “You Don’t Say,” reach back past the pop balladry to the group’s R&B roots; but even the slower songs, including bass vocalist Herb Reed’s interpretation of “Sixteen Tons,” are more juke joint than supper club.

The group revs up the standards “On a Slowboat to China,” “I’m Gonna Sit Right Down and Write Myself a Letter” and “Let’s Fall in Love” to show tempo, giving a sense of what they might have sounded like at a hop. All five Platters get lead vocal spots, and the group is supported on several tracks by the orchestral direction of Mercury’s David Carroll. Also heard here are Wrecking Crew regulars Plas Johnson, Barney Kessell, Earl Palmer and Howard Roberts, and on the scorching opening pair, saxophonist Freddie Simon and guitarist Chuck Norris. Bear Family’s crisp reproductions of mono and stereo masters are housed in a tri-fold digipak with a 36-page booklet of photos, liner notes and a detailed discography. This is a novel view of the Platters’ catalog, but one that sheds new light on their range. [©2017 Hyperbolium]